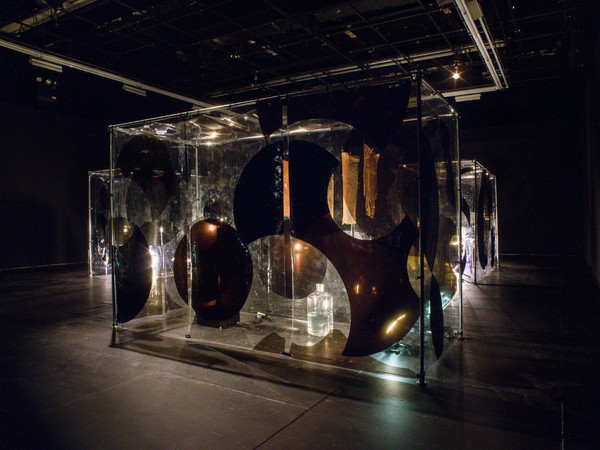 From February 17 to July 24, 2022, Pirelli HangarBicocca will present “Metaspore,” a solo exhibition by Anicka Yi, one of the most innovative and engaging figures on the contemporary art scene. In her artistic practice, Yi combines languages and themes from many fields, ranging from philosophy to biology, from politics to science fiction.
The exhibition will feature more than twenty installations, multifaceted creations that dissolve the boundaries between science and art, organic and synthetic, and human and non-human—an investigation of the concepts of metamorphosis, interdependence, ecosystem, and symbiosis. The show will catalyze visitors’ sensory and perceptual experiences, through smells, mutating forms and disorienting biological elements.
The colored bacterial ecosystems in the work Biologizing the Machine (spillover zoonotica), 2021, exemplify this approach. Enclosed in large display cases and created in collaboration with the Department of Earth and Environmental Sciences of the University of Milan-Bicocca, the work bears witness of the relation between art and science typical of Anicka Yi’s practice, while also dialoguing with the viewer through the mutations and reactions of its microorganisms to the surrounding environment.

The exhibition
Curated by Fiammetta Griccioli and Vicente Todolí, “Metaspore” brings together more than twenty works created by Anicka Yi (Seoul, 1971; lives and works in New York) over the last decade, and explores the approach taken by the Korean-American artist, characterized by the use of perishable and industrial materials in assemblages that defy the immutable nature of sculpture and installation.
The most comprehensive show ever presented of her work, “Metaspore” is conceived as a synesthetic and immersive journey. Starting with the artist’s first projects in 2010, focused on the research into tactile and olfactory materials, the exhibition’s narrative includes the many installations Yi subsequently created with her studio together with different professional figures, such as architects, scientists and perfumers, with whom she has co-created projects investigating the most compelling issues today in the fields of technology and science.
The title “Metaspore” is inspired by the biological world: spores are the cellular units that reproduce and give rise to new living entities without the need for sexual reproduction. This concept is symbolically linked to the exhibition at Pirelli HangarBicocca, which transforms and mutates over time. It is the beginning of a new chapter in Yi’s career: the decision to explore works from the past represents a moment of reflection and imagination about future developments in her practice. The show focuses, on one hand, on the olfactory dimension with a series of works that include scents and, on the other hand, on works that explore such biological processes as decomposition and metamorphosis.
Visitors can access the exhibition space through a long corridor originally conceived for the artist’s solo show at the Kunsthalle Basel in 2015. Each side of the structure features a series of sculptures made from glycerin soap and bacteria enclosed and highlighted in illuminated display cases, as if holding precious objects. After passing through this diorama of contrasting concepts, like those of hygiene and contamination, visitors find themselves immersed in a dark space in which soft light is given off by the many installations and by a futuristic suspended environment. Along the exhibition path, viewers are confronted with many other works that make us reflect on the concepts of body, interdependence, ecosystem, and symbiosis.
Among the works is an expanded and updated version of Biologizing the Machine (terra incognita), originally presented at the 58th Venice Biennale in 2019, which has here been commissioned and produced for Pirelli HangarBicocca. Continuing the artist’s ongoing research on bacteria, Yi and her studio collaborated with the Department of Earth and Environmental Sciences at Milano-Bicocca University to create a new version, titledBiologizing the Machine (spillover zoonotica), 2021. Seven large glass display cases house a Winogradsky culture (named after the Russian microbiologist who invented this device for the development of microorganisms), a locally created ecosystem combining soil bacteria, cyanobacteria and algae. Through cycles of growth, stasis, and decay, the work contrasts rules and chaos transforming over time, reacting to the surrounding environment: the organisms take different colors, generating “suspended paintings” that alter during the exhibition period.
Included in the show, Auras, Orgasms and Nervous Peaches, 2011, was created by the artist for her first solo show at 47 Canal gallery in New York. The piece appears as an empty, aseptic and ceilingless room with outer walls that ooze olive oil, triggering a short- circuit between the inside and the outside, hinting at the fluids entering and exiting our bodies. While in Skype Sweater, 2010/2017, Yi examines the organic and political aspects of the body, using iconic materials from her visual lexicon, such as air, gel, and tempura-fried objects. The installation questions the exploitation of bodies, their relationship to the animal dimension and the consumer and capitalist lifestyle, using culinary techniques and referencing the basic ingredient of cosmetics: glycerin.
A sci-fi aesthetic permeates numerous works in the exhibition such as Shameplex, 2015, which is composed of seven Plexiglas vessels filled with green ultrasound gel, in which metal pins gradually rust as a result of their contact with the glutinous substance. This futuristic dimension informs also the artist’s investigation of contemporary anxiety related to hygiene and contamination. Such fears were key features of “You can call me F,” a prominent 2015 exhibition held at The Kitchen in New York, whose main works are being exhibited at Pirelli HangarBicocca for the first time together since then. Originally created in the context of the Ebola epidemic, the five installations arranged in the center of the Shed resemble “quarantine tents”— structures with transparent PVC walls, each depicting geometric and abstract shapes suggesting biohazard signs.

Anicka Yi emerged as one of the most radical figures on the art scene during the late 2000s, working on themes that lie between art and science. Her research contributes to the current debate on the redefinition of the categories of human and machine, natural and synthetic. Yi’s work generates narratives that combine philosophical questions with sci-fi imagery, and creates connections between biology and literature, life and storytelling, taking an approach labeled as “bio-fiction.” “I want to fuse the writing of life— the notion that all living things have their own stories, contexts, perspectives, and histories—with the study of life, which also now includes an embrace of nonhuman perspectives”. (Anicka Yi in Ross Simonini, “In the Studio: Anicka Yi,” Art in America, 2017).
In her practice, Yi combines a cinematic visual vocabulary with the potential of organic and biological materials, such as gel, glycerin, yeast and other microorganisms, creating hybrid sculptures and installations that often form complex “eco-systems,” as is seen in Le Pain Symbiotique made for the Taipei Biennial in 2014, which is also shown in Pirelli HangarBicocca. The work is composed of an inflatable, transparent structure through which visitors catch sight of a landscape made of edible materials interspersed with projections of bacteria seen under a microscope.
The artist focuses her attention on senses such as smell, touch and taste, which are largely overlooked in visual culture. Taking a synesthetic approach to her research, Yi reflects on the fundamental functions of elements linked to the invisible and ephemeral, such as air, smell and bacteria, and on how they condition our daily lives, emphasizing not only their scientific and perceptual aspects, but also their socio-political dimension.
Scents and fragrances become autonomous sculptural works that occupy and define space as they pass through our bodies in the form of imperceptible molecules. In particular, the artist is fascinated by the way odors and scent can alter and manipulate our environmental perception and allow us to distinguish otherness, while also highlighting how discomfort aroused by smell is intrinsically linked to our fear of the Other. InImmigrant Caucus, 2017, for instance, included in the exhibition at Pirelli HangarBicocca, pressurized canisters emit a scent created by the artist, in which the chemical components of the sweat of Asian-American women are hybridized with the emissions given off by carpenter ants. The juxtaposition of the two olfactory elements takes the form of a political commentary on Asian-American minorities and the invisibility of their work. Over the years, Yi has structured a practice informed by philosophy and science, as well as approaching the fields of microbiology, synthetic biology and artificial intelligence and working closely with scientists. Her philosophical investigation and artistic practice have also been influenced by the theories of thinkers and academics such as Donna Haraway (1944), Lynn Margulis (1938–2011), Karen Barad (1956), and Eduardo Viveiros de Castro (1951), to name but a few. They have challenged the notion of human exceptionalism by proposing a model of symbiotic relationships between humans, animals and plants, and have conducted research into more-than-human forms of consciousness and intelligence.
These collaborations and studies are a fundamental aspect of the complex and elaborate ecosystem that Yi created for the commission for Tate Modern’s Turbine Hall in London, In Love With The World, 2021 (open until February 6, 2022). Yi reconfigured the monumental industrial space as a series of “scentscapes,” specially created fragrances meant to evoke particular time periods from the Precambrian era to the Industrial Age. The environment also contains unique machines, called aerobes, that resemble cephalopods and mushrooms, whose fluctuations are influenced by external elements such as changes in temperature and odors. Combining technology and biology, art and science, the artist reflects on how machines and artificial intelligence can be re-imagined, evolve and become independent of human beings, by entering into communication with plants, animals and microorganisms.   Catalogue
“Metaspore” is accompanied by the most comprehensive monograph on the artist, published by Pirelli HangarBicocca with Marsilio Editori. It includes contributions by the art historian Giovanni Aloi, the professor of English and gender studies Rachel Lee, and a conversation between the author and biologist Merlin Sheldrake and Anicka Yi, together with a text by the project’s curators. The publication also contains detailed entries on the exhibited works, the complete visual chronology of Yi's solo exhibitions, and a glossary of her most relevant conceptual references, specially conceived with the artist.
Anicka Yi
Solo shows by the artist have been organized by many internationally renowned institutions, among which: the Hyundai Commission, Turbine Hall, Tate Modern, London (2021); Solomon R. Guggenheim Museum, New York (2017); Fridericianum, Kassel (2016); Kunsthalle Basel, the MIT List Visual Arts Center, Cambridge (MASS.), and The Kitchen, New York (2015); the Cleveland Museum of Art (2014). Yi has also participated in many group shows, including the Venice Biennale (2019); the Whitney Biennial, New York (2017); the Okayama Art Summit, the Gwangju Biennale (2016); the Taipei Biennial (2014); the Lyon Biennale (2013).
Anicka Yi has won important prizes, among which The Louis Comfort Tiffany Foundation Award (2011) and the Guggenheim Hugo Boss Prize (2016).
In 2019, in partnership with Barnabé Fillion, she produced “Biography Fragrance,” a limited edition of three fragrances. The exhibition program
“Metaspore” is part of the 2022–23 exhibition program conceived by Artistic Director Vicente Todolí and the curatorial department: Roberta Tenconi, Curator; Lucia Aspesi, Assistant curator; Fiammetta Griccioli, Assistant Curator.
The program will continue in the Navate with exhibitions by Steve McQueen (March 31– July 31, 2022); Bruce Nauman (September 15, 2022–February 26, 2023); Ann Veronica Janssens (April 6–July 30, 2023); and James Lee Byars (October 2023–March 2024). In the Shed: Dineo Seshee Bopape (October 6, 2022–January 29, 2023); Gian Maria Tosatti (February23–July16, 2023); and Thao Nguyen Phan (September 2023– February 2024).