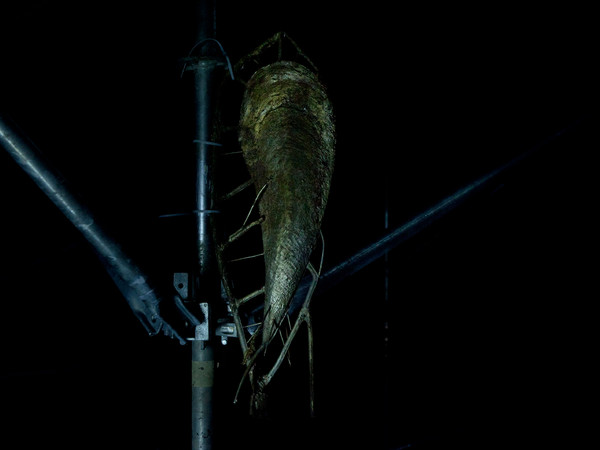 Eight solo exhibitions by international artists, produced specifically for one of the major contemporary art venues of Europe. Pirelli HangarBicocca’s Chairman Marco Tronchetti Provera and Artistic Director Vicente Todolí today presented its exhibition program for 2019 and 2020.
Over the 24 months, artists from different backgrounds, generations, and cultures, will offer new visions of the world through a variety of medium and themes. In the Navate space: Sheela Gowda (Bhadravati, Karnataka, India, 1957),Cerith Wyn Evans (Llanelli, Wales, UK, 1958), Chen Zhen (Shanghai, 1955 – Paris, 2000) and Steve McQueen (London, 1969). In the Shed space: Giorgio Andreotta Calò(Venice, Italy, 1979), Daniel Steegmann Mangrané (Barcelona, 1977), Trisha Baga(Venice, Florida, USA, 1985) and Neïl Beloufa (Paris, 1985).
“Here at Pirelli HangarBicocca we produce site-specific exhibitions in which the works become part of an unaltered industrial setting. The Navate (5,500 sqm) is dedicated to more established artists while younger or mid-career artists exhibit in the Shed (1,400 sqm), featuring solo exhibitions that allow visitors to gain a thorough understanding of the artist’s main themes. We will continue to stage exhibitions developed entirely for these spaces, undertaking to create new exhibition models rather than imitate existing ones. Our program for the next two years features artists from different countries, able to offer novel and interesting perspectives, which are probably ahead of our time,” explains Vicente Todolí.
“Pirelli’s approach to innovation has always been one of the driving forces behind its enterprising spirit, ensuring its future. Through its support for Pirelli HangarBicocca, the Company reaffirms its ongoing focus on the transformations and changes taking place in society, which art is able to grasp in advance, encouraging an exchange capable of producing new values and generating new ideas. Thanks to the work of the Artistic Director Vicente Todolí and his staff, we will be involved in a number of unique projects, like those we have developed up to now and those we will continue to see in the future,” states Marco Tronchetti Provera, Chairman of Pirelli HangarBicocca and Executive Vice Chairman and CEO of Pirelli.
The public can expect a program enriched with different visions and voices, thanks to artists from different countries and varied origins—Italian, Indian, Spanish, British, Filipino, Chinese, Algerian—and their many different cultures. This geographically diverse program will feature a variety of medium, including sculpture, installation, video, and film.

Pirelli HangarBicocca In keeping with Pirelli HangarBicocca’s mission to make art accessible to all, as summed up in the hashtag #ArtToThePeople, that many visitors have themselves adopted, entry to the exhibitions will continue to be completely free of charge. In addition, the program will have extensive educational activities, with the production of specific exhibition guides, publication of catalogues for each exhibition and presence of cultural mediators in the exhibition spaces, available to discuss the artists.
The Public Program completes the 2019–2020 exhibition program: a cultural calendar of conversations, opportunities for in-depth study, film and video screenings. It also includes music projects commissioned and developed together with the artists. The public activities will also include special visits to learn more about the historical and artistic themes associated with the exhibitions. In addition, Pirelli HangarBicocca will be extending the projects and activities developed by the Education Department for younger visitors and families.
Visitors
Every year, on average, Pirelli HangarBicocca draws 260,000 visitors, holds 40 cultural events, and involves 10,000 children and young people in its educational activities for families and students, with 600 workshops.
Exhibition calendar
The Artistic Director, Vicente Todolí, developed the 2019–2020 calendar together with the curatorial department he heads. Each year, the 15,000 sqm space of Pirelli HangarBicocca will host two exhibitions by established artists in the “Navate” and two by younger artists in the “Shed.”

2019
Giorgio Andreotta Calò | Curated by Roberta Tenconi
Shed | 14 February – 21 July 2019
This is the first institutional exhibition in Italy of one of the three artists who represented Italy at the 57th Venice Biennale (2017). He develops an exhibition project for Pirelli HangarBicocca conceived as a single landscape, which will focus on his sculptural practice, presenting works produced between 2008 and today, as well as new pieces.
Sheela Gowda | Curated by Nuria Enguita and Lucia Aspesi
Navate | 4 April – 15 September 2019
The first solo exhibition in Italy by one of the major exponents of Indian contemporary art, whose work ranges from drawing to sculpture and large-scale installations. As well as her latest works, the exhibition will feature pieces dating back as far as 1996, characterized by a strong spatial dimension and by the use of a wide variety of materials.
Daniel Steegmann Mangrané | Curated by Lucia Aspesi and Fiammetta Griccioli Shed | September 2019 – January 2020
This artist of Spanish origin, but living in Rio de Janeiro since 2004, places the viewer’s physical and sensory dimension at the heart of the exhibition project. Thanks to his interest in biology, Daniel Steegmann Mangrané’s works explore complex ecological systems such as the Brazilian rainforest, using film, virtual reality settings, 2D holograms, sculptures, and installations.

Pirelli HangarBicocca Cerith Wyn Evans | Curated by Roberta Tenconi and Vicente Todolí
Navate | October 2019 – February 2020
Cerith Wyn Evans is one of the most important European artists of the last twenty years. In his biggest ever exhibition to be held in Italy, he will redefine the space of the Navate with a body of works produced over the last ten years, in which he explores the expressive potential of light and sound, modifying the space and visitors’ perception of it.

2020
Trisha Baga | Curated by Lucia Aspesi and Fiammetta Griccioli
Shed | February – July 2020
For her first major institutional exhibition in Italy, the American artist and film-maker of Filipino origin will present a large selection of works creating an unpredictable narrative. Her complex 2D and 3D video installations, ceramic sculptures, and everyday objects explore themes such as gender identity, digital world, and technological evolution.
Chen Zhen | Curated by Vicente Todolí
Navate | April – September 2020
A major retrospective dedicated to the Chinese artist—resident in Paris since 1986— who was one of the most successful at blending eastern and western expression, investigating the relationship between spirituality and modern capitalist culture. Through a broad selection of monumental installations, the exhibition offers a vision of his work from the 1990s until the time of his premature death.
Neïl Beloufa | Curated by Roberta Tenconi
Shed | September 2020 – January 2021
For his first solo exhibition in Italy, the French-Algerian artist brings together a rich selection of works, including films, installations, and sculptures, spinning a narrative in which visual culture, pop references, and technology intertwine.
Steve McQueen | In collaboration with Tate Modern
Curated by Vicente Todolí and Clara Kim with Fiontán Moran
Navate | October 2020 – February 2021
One of the most important contemporary artists, film-makers and screenwriters working today, Steve McQueen’s solo exhibition at Pirelli HangarBicocca, developed in collaboration with Tate Modern in London, provides a rare opportunity to experience McQueen’s unflinching, visceral works in immersive installations which deal with crucial issues of identity and belonging.
The artistic program was developed by Artistic Director Vicente Todolí and the curatorial team of Roberta Tenconi, Curator; Lucia Aspesi, Assistant Curator; Fiammetta Griccioli, Assistant Curator.
Co-curators are Nuria Enguita, director of the Centre d’Art Bombas Gens in Valencia (Spain) for the Sheela Gowda exhibition in 2019 and Clara Kim, Senior Curator, with Fiontán Moran, Assistant Curator, Tate Modern (London, UK), for the Steve McQueen exhibition in 2020.
Vicente Todolí has been Artistic Director of Pirelli HangarBicocca since 2012. He was Director of the Tate Modern in London from 2003 to 2010, while from 1996 to 2003 he directed the Museu Serralves in Porto and from 1988 to 1996 he was Artistic Director of IVAM (Instituto Valenciano de Arte Moderno).