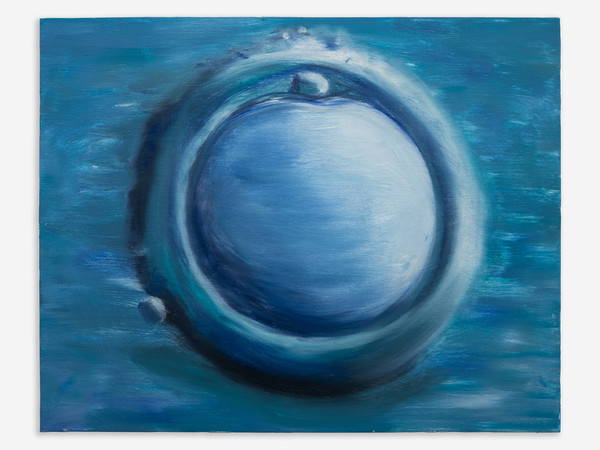 Peres Projects is pleased to announce the debut solo exhibition of Tan Mu (b. 1991 in Yantai, CN) at our new space in Milan.
An oft-cited turn in the media landscape was the emergence of 24/7 live news in the aftermath of 9/11. The seamless reportage of events from nearby and afar creates a shift in the public’s cognitive modes of being in the world and accordingly, the artistic representation of this perception. Parallel to the relatively small number of news photographs that went on to define a historical moment, continuous coverage and news tickers have joined an infinite number of amateur photos and video footage that has come to shape the narrative and collective memory of a certain space and time.
In the densely woven network of events, the institutional apparatus increasingly appears as imminent generative machinery. In early 2022, a war unfolds in a cultural, political and censorial proxy battlefield – echoed in many other aspects of everyday life – with powers and intentions conferred on individual life by contending states and organizations. Conversely, web protocols morph into proliferating consumer goods alongside myths and controversies, public health policies dictate a household’s routine and living conditions, and multilateral or intergovernmental fora present a succinct expression of individual beliefs and sentiments. The inner workings of the machinery, meanwhile, remain obscure to many.
Related is the changing typology of source photos and viewing experiences. Drawing from archives of mainstream media, satellite imagery and GIS data, corporate blogs that explain milestone innovations, and shared encounters with devices and applications, Tan Mu’s work faithfully documents the momentum of these transitions. It promises a coherent but multifarious representation of historical development and painterly configuration by juxtaposing images of electronic inventions from the 1970s, such as the DEC’s PDP-10 computer and the blue box telecommunication device, with the data center of today’s tech giants and a game designer’s digital landscape. Impulses for exchange and archiving grow first into signals and bytes and then towards monstrous storage systems. Tan Mu’s body of work offers not assertion or provocation, but a channel towards the key knots, links and intangible forces between historicity and contemporaneity. Categories of the physical and digital, historical and imaginary, and household and cutting-edge give way to vivid memories surrounding each event.
The careful choice of subject matter and imagery sources allows Tan Mu to explore the image as a medium. In particular, the way truth and value is constructed both aesthetically and through how the image comes into being and is circulated. For example, the paintings based on archival or documentary images retain a connection to the past yet at the same time engage with the viewer in the present.
A tale of shifting modes continues as mobile devices eclipse traditional information sources. Industrial design of smartphone screens, evolving photographic methods and the aesthetics of postmillennial social media all shape the image one sees and subscribes to as reality. In NO SIGNAL (2019), the static noise speaks of a liminal appearance upon anticipation of transmissions versus the convergence of random radio waves and natural sources. Breaking from the flow of information, the momentary absence of meaningful input on TV sets — and in other works on show, digital screens — brings anxiety and suspension but also an elusive exit. In a spatial dimension, the locale of “no signal” foregrounds the connectivity between home device and scientific detectors; among others, the cosmic microwave background exerts a substantial influence on the static on analog televisions. Examples of technological, social and affective connectedness permeate Tan Mu’s paintings.
It is only amid such entwined objects, bodies and events that Tan Mu’s view of her work as timestamps manifests its true meaning. Instead of merely recording the date, these “time-stamps” undertake a dual function, a dynamic temporal marker and a stamp bridging pictorial creativity and tokens of postal operation. In other words, the works testify to the process of world-making, of human beings’ mutually shaping techno-science, politics, culture and nature. More precisely, the process is seen through a documentary lens that also emancipates the subject from its fixed place in history, enabling a multitude of contact points with the present. PERES PROJECTS Peres Projects Piazza Belgioioso, 2, 20121 Milano tel +49 30 275 950 770 info@peresprojects.com www.peresprojects.com In this exhibition, the seated young footballer in Turf (2021), arguably the least ambiguous in its crystallized historical form among all other technological atemporality, is in fact Tan Mu’s father, a professional player who decided to retire upon the artist’s birth. The image becomes a record to retrieve an unwitnessed past, a “family photo” that resides outside personal memory and even the family album. Juxtaposed with the “generations” of technology that are adumbrated in this group of paintings, Turf also searches into the positioning of the self and universe, heritage and future, familial lineage and techno-scientific progress.
In the mid-1960s, backdropped in postwar skepticism and prosperity, Gerhard Richter notes that painting from photographs, absolute and autonomous, frees him from conscious thinking.[1] Such keenness continues to resonate in younger generations of painters, yet for Tan Mu, the vision reorients to an interconnected world in reflexive formation and the apparatus behind images that reveal or conceal what reality is. Beyond the artistic concept and subject, Tan Mu’s technique, developed through her vigorous training in painting and media at top academies in China and the US, conveys a distinct style that balances meticulous control, confident execution and genuine appeal.
by Yizhuo Li

Tan Mu (b. 1991 in Yantai, CN) lives and works in the United States. She graduated from the High School of Central Academy of Fine Arts, Beijing in 2011 and earned her BFA in Expanded Media Studio Art from Alfred University in 2015. Her work restores the visual and spiritual potency of technology, combining sociohistorical and philosophical approaches in her art practice. Her paintings and multidisciplinary work examine bodily and mediated presence in a knowledge society, beyond machinery practicality and iconography; from IVF and DNA editing to quantum computer and privacy stamp, the interiority of each apparatus joins the artistic process of thinking and making. Additional focus is placed on the convergence of geometry and physics with nature and technological culture.