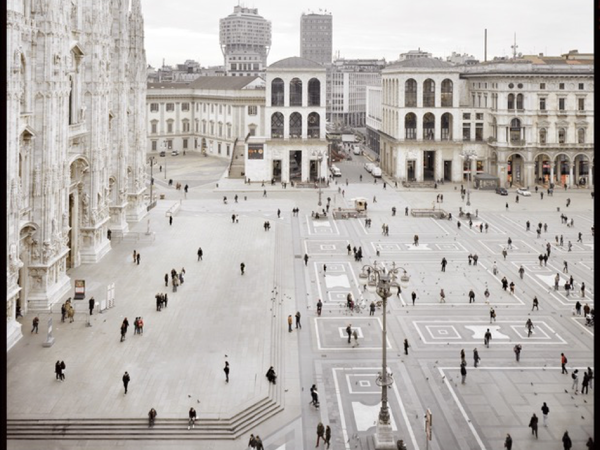 "Vincenzo Castella portrays the world as a correlation between private and common spaces in our society rather than a sum of forms, languages and objects”. - Frank Boehm

From February 27 to April 27, 2019, BUILDING presents Milano, a solo exhibition by Vincenzo Castella, curated by Frank Boehm.
The exhibition, which consists of thirty medium and large format works, over one hundred unpublished photographs of the construction of the San Siro stadium and three video projections, is intended as an unprecedented anthology of Vincenzo Castella’s work in Milan.
An internationally renowned artist, Castella works mainly in the field of landscape photography, but a landscape built by man, the scenic settings for the cities themselves.


The title of the exhibition is significant, clearly intended as a tribute to the city that is the protagonist of this exhibition and the main theme in a line of research that Vincenzo Castella has been pursuing since the late 1980s. Milan is the artist’s adopted city, his current residence, and the place where he began his research on the city.

The exhibition project is built on large-format images, characteristic of Castella's work, and organized by the curator Frank Boehm into three sections: Rinascimento (Renaissance), Contesto Urbano (Urban Context) and Natura (Nature). The exhibition opens with views of some of the most famous Milanese Renaissance interiors, churches, angles and sacred walls, such as Leonardo Da Vinci’s Last Supper (Cenacolo) and the Church of Santa Maria delle Grazie, which make up a part of the artist’s most recent work. The spaces on the first and second floor display shots of Milan’s urban environment, with a detailed study of the construction of the San Siro stadium, a series from 1989 which provided a basis for the artist to develop his work on urban spaces.
On the third floor, the theme is connected to nature: Castella, rather than seeking a landscape nature, looks at an indoor, Mediterranean and tropical nature, collected and adapted to the heights of the architecture that hosts it, developed through mankind’s education. The artist began focusing on this theme in 2008 and continues in this direction today for a hypothesis of new reflections.

The representation and therefore the analysis of the city are composed of environments that differ greatly from one another, conceptually connected by an approach of estrangement: while all the photos portray everyday, accessible places, shot from the ground - the artist and viewer are always part of the same space, inside the architecture, within the metropolis - the images are anything but common. The measure of distance creates a sensation of estrangement, a new point of view.

Creating the large format prints that make up much of the artist’s work requires considerable effort and time when it comes to preparing the final work. This approach means that, for Vincenzo Castella, the production of images is spread out over time in a rarefied way, and the works invested with extreme care and quality of detail.

Vincenzo Castella was born in Naples in 1952. He began working as a photographer in 1975; between 1975 and 1982 he completed Geografia privata (Private geography), color photos of home interiors. In 1976, 1978 and 1980 he worked in the United States on the project People di Hammie Nixon (Hammie Nixon’s People): a semi-imaginary biography dedicated to the blues, African-American culture and the architecture of the cities of the southern United States (photos and 16mm film). Since 1980, he has exhibited his works in Europe and the United States. In 1998, he began to photograph cities, while in 2006, he started making installations based on large format photographic negatives: this is the case with the Cronache milanesi (Milanese chronicles), a work presented at Art Unlimited, Basel 2009.
In 2015, the Tate Gallery’s Board of Trustees incorporated five works from the Malta Project (Progetto Malta) into the museum’s collection. Vincenzo Castella lives and works in Milan.