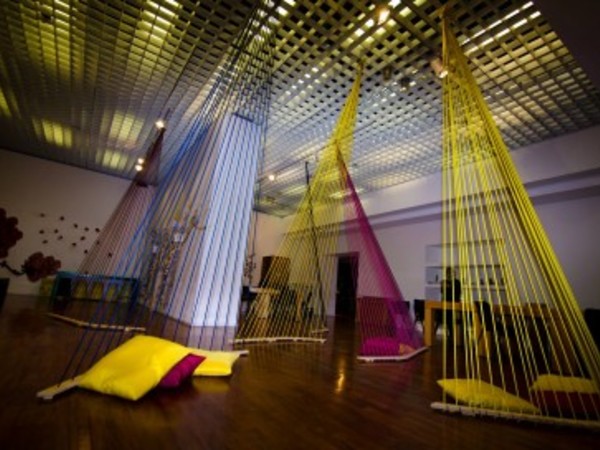 At the opening night of the new appointments Vitrine and Surprise, the Educational Area GAM will be presented to the public Instant Installation of Catherine Tiazzoldi.
Presented at the New York Design Week 2013, and at Memphis Art Museum, Instant Installation is designed as a maze of tubes and colored latex prefabricated rails designed to create pathways and spaces collected in more open spaces.
"To work on this project idea, we extracted the individual design variables. We focused on some properties such as thickness of the wires of latex, the length and porosity of the fiber, the type of straw derivable from the linear geometry, the spacing between a wire and the other, the colors. We have analyzed how these variables could be combined to create different types of space. "
Created as a product of design with the feature so that it can be sorted, packaged and shipped, is a portable installation, "a hybrid between product design and architecture," which can be reconfigured into different shapes to create different spaces whenever is used. In this way the curiosity of the "public" is invited to explore the different possibilities of connection with the area, playing with the vibrations of the strings of latex in a space that is constantly changing.
Recognized internationally for the innovation of its projects and the owner of Studio based in Turin, Catherine Tiazzoldi is one of the most creative women eighty of the world stage architecture and design. He currently teaches at the Graduate School of Architecture, Planning and Preservation at Columbia University in New York, at the Polytechnic of Turin, at the Rhode Island School of Design, IED Milan. He has received numerous awards and accolades, including a nomination for the Cooper Hewitt National Design Museum Award, Architecture Prize Reveal the Order of Architects of Turin, a finalist for the award in Renzo Piano for the Young Italian Talents in Architecture and was honored at the Memphis Art Museum, theachers College Competition. Among the projects include the headquarters in Turin Toolbox Torino Office Lab / & Co-working in 2008 and the renovation of the headquarters of the Circle Players at the Palace Graneri in 2011.