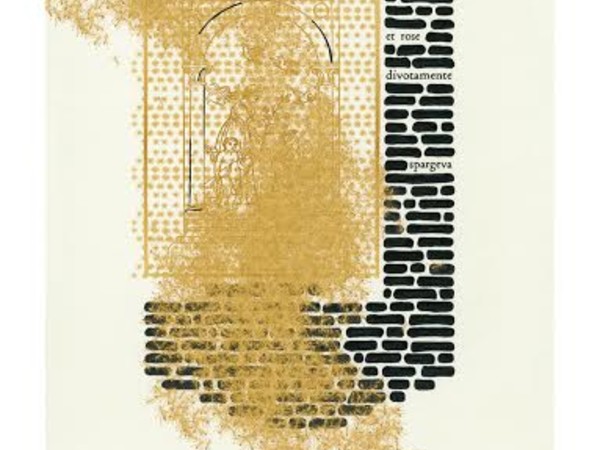 The now historic Prize International of Graphic Do Forni is now in its twenty-ninth edition, once again confirming the continuity of the great tradition of "Food Art" in Venice. As a number of years, the event is organized with the collaboration of the Civic Museums Foundation of Venice Award that recognizes this as an important event of the winter Venetian art. The special commission, coordinated by Enzo Di Martino, has decided to award the prize for this edition artist Emilio Messina Isgrò. The prestige of this coveted award (one of the longest among those dedicated to art in Italy, as we recall Eligio and Diego Paties), sponsored by the generosity of Eligio and Diego Paties and edited by critic Enzo Di Martino, is now secured by 'importance of the more than fifty Italian and foreign artists to which over time has been attributed, and is now officially witnessed by the fact that in recent years it is housed, as well as in the halls of the popular restaurant, in the majestic spaces of the Museum of Modern Art of Ca 'Pesaro, a true treasure chest Venetian modern and contemporary art, and has been honored by the names of such great importance, only to mention a few, Tadini, Sassu, Baj, Plessi, Gianquinto, Licata, Paladino, Chia, Paolini, and Adami, last year, from Pesaro Walter Valentini; in addition to foreigners, Arroyo, Folon, Frohner, Tilson, Pepper, Berrocal, Verdet, Azuma, Mitoraj, who died recently, Murtic ', Velickovic and Peter Blake. In addition, the event is sponsored by the Veneto Region, the City of Venice and the Civic Museums Foundation, using - as tradition now - sponsorship of Bellussi Sparkling. The awards ceremony, in the presence of the artist and of the representatives of the institutions of the city, will be held Friday, December 12 at 6pm at the International Gallery of Modern Art in Ca 'Pesaro, where for a month, at the same time Do Forni, a beautiful selection of works by Isgrò will remain on display.
Isgrò (Barcellona Pozzo di Gotto, Messina, 1937), as well as recognized internationally renowned artist, is appreciated, poet, playwright and writer. Since 1956 he lives and works in Milan, except a parenthesis in Venice, from 1960 to 1967, where he was in charge of the cultural pages of the newspaper "Il Gazzettino". He made his debut as an artist in the mid-sixties as part of interdisciplinary and conceptual Visual Poetry by performing the first erasures in 1964; his first solo exhibition was held in 1966, just in the lagoon city, in the historic Galleria and The Ferry occasion publishes the "Statement 1" with which precise conception of poetry as "the art of the general sign". In 1972 he was invited to the Venice Biennale where he will exhibit again in 1978, 1986 and 1993, after which his "curriculum" is enriched more and more of the great successes exhibitions and publications, cultivating parallel painting, engraving and literature, obtaining important awards in different fields of his creativity. In 1977 he was awarded the First Prize at the XIV Biennale of Sao Paulo. Last year, the GNAM Rome hosted the retrospective exhibition "Italian model" (2013-1964), and, in May this year the Pecci opened the exhibition in three days "Damn Tuscan, Italian blessed" .
Presenting the latest edition of the Prize, Di Martino, who has always closely followed the activities of the Sicilian master, wrote, among other things: "There are artists who are difficult to define, ie to be cataloged in a formula criticism and aesthetics because their work constitutes a new fact, the beginning of a meaningful event before then nonexistent. Emilio Isgrò clearly belongs to this 'category' of art and not by chance, when there appeared his first 'erasing' in 1964, were greeted with surprise, ill-concealed veins of scandal and some indecision on their 'definition', the most common being one of the then nascent 'visual poetry'. The personality of Isgrò is in fact extremely complex because, in addition to factual and conceptual artist, is also a writer and poet, playwright, critic and theorist of art processes. However around his erasures that turned the attention of art critics and literary, with the production of a huge amount of texts and reflections, sometimes even misleading and contradictory.
Manifesting often, however, a sort of indefinable 'embarrassment' before a linguistic operation and visual, in an original and in some ways even paradoxical, accentuates the significance through its negation, its cancellation ".