Paradoxes. A series of unforeseeable enconteurs between classic and contemporary art. Lesenes by Giulio Aristide Sartorio and a sound installation by Alberto Tadiello 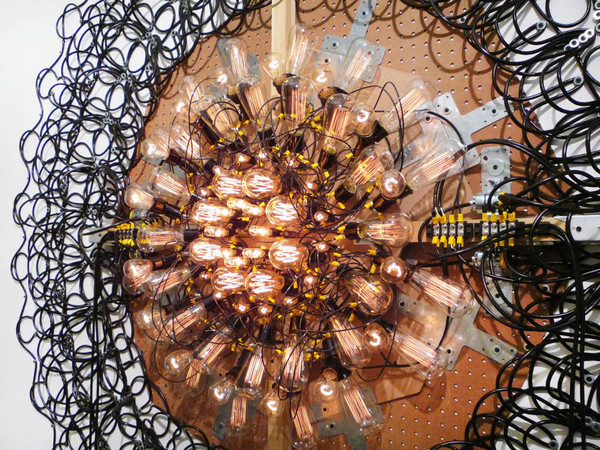 Thanks to renovation work made possible by Dom Pérignon, the International Gallery of Modern Art in Ca’ Pesaro, Venice is opening a new space where young artists will be brought together with works from the historical collection. A vision of “Paradoxes” will be given in a series of unexpected encounters between the art of today and that of the 19th and 20th centuries. The exhibition will take place in the new “Dom Pérignon Space” from 17 October 2014 to 18 January 2015.
The space is a unique “project room” where the “old” and the “new” are mixed and fused with each other. The idea for this series of presentations came from the Fondazione Musei Civici di Venezia, which is directed by Gabriella Belli. Together with the architect Daniela Ferretti, it has organized the reopening of the two stunning rooms, which look out onto the Grand Canal.
The “Paradoxes” series and its inaugural exhibition have been curated by Angela Vettese.
For the opening of the “Dom Pérignon Space”, the young artist from Vicenza Alberto Tadiello (1983) will go up against the impressive output of Giulio Aristide Sartorio (1860-1932), and in particular his large canvases entitled The Poem of Human Life (a cycle produced for the Art Biennale in 1907). They show allegories of Light, Darkness, Love and Death with ten vertical, interposing panels known as the Caryatids that represent Grace and Art supported by virile vigour.
With these works, the artist wanted to present a highly dramatic vision of existence. D’Annunzio was among the admirers of the complex iconography, which seems to fuse the Mediterranean and Northern cultures, with clear nods to Nietzsche’s eternal return concept.
The monochrome cycle is lacking in architectural elements and it is particularly noteworthy for its striking depiction of moving figures with clearly symbolic intentions.
Tadiello integrated his work with Sartorio’s exceptional creations so that they almost form a new entity.
The theme of energy diffusion is always behind the works of the young artist. In this case, the opening bars of a piece of music were recorded and repeated numerous times in staggered playback, as if they had been twisted. Tadiello’s works often take on the form of sound productions, with the technical equipment needed to generate audio volume becoming sculptures.
The works highlight the value of tension, which can make plain both dedication and enthusiasm.There is nothing banal or frivolous about this way of facing existence, indeed it slots together perfectly with the need to pervade the fruitful toil of nature and the way that waves of activity, sound and nourishment flow through it.
The dependence on nature also gives rise to the frequently recurring “buzzing”, “creaking” and “repetitive noises”, as well as the “symmetry in form”. We must look from this viewpoint at the “daisies” of loudspeakers, “rays” of electric wires and looped sounds such as “calls” and “sighs”.