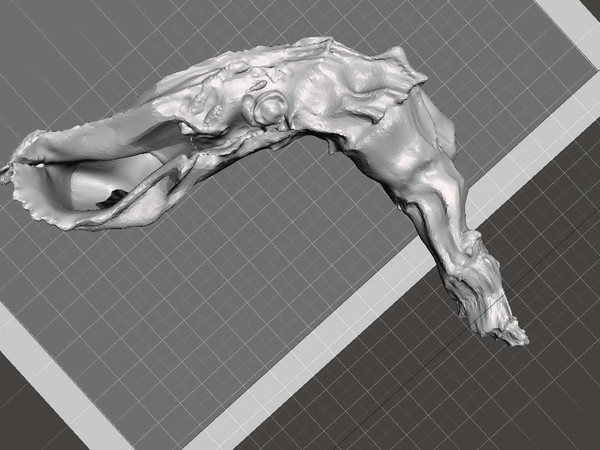 
Dimora Artica presents Body Ache, an exhibition by Andrea Barbagallo. The show it’s focused on the obsessive reproduction of the human body made through the use of technology. Barbagallo creates a biodegradable microcosm where the artworks can be modified by processes such as decomposition made possible by the temperature alterations, the air, the mould, the seeds, by the contaminations. In this way his works through a ritual process becomes matter of the world, like an electroshock. This process has been inspired also by the old millennialist religion named Cargo cult. Cargo Cult consists on worship objects belonging to the occidental mass society in order to summon their gods and to have consumer goods back. The objects are seen as a fetish, a medium, a bridge in between the material and the spiritual world. The Cloud storage system can be seen as a sacred place where in a similar but opposite process the immateriality of the SLT files becomes the materiality of the 3D printed objects. Through the reincarnation of the technological matter, the divine, the iperuranium and the data's archives are fundamental. The transformation of the matter has been made starting from the immaterial, from the idea, from the spiritual matrix that, unlike Christ's body, doesn't elevates but decays.

Biodegradable works by Andrea Barbagallo create links between art, nature and technology. Realized with technological instruments, they are anthropomorphic autonomous entities which get in touch with the space surrounding them, producing symbiotic connections with it. By putting a strong focus on materials and shapes, his works give birth to narrations about world and body - two main clues in the artist's research. The main late exhibitions are Habitativo at spazio Pophouse (Milan), Vendonsi at Casa Novecento (Monza), Lue at Spazio Serra (Milan), 10x10 per at galleria Davide Gallo (Milan).