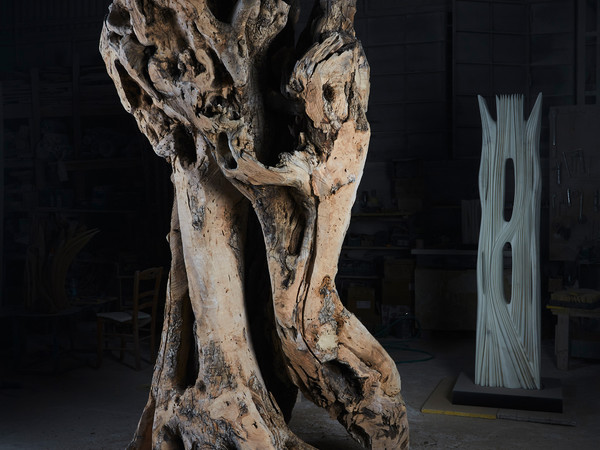 A huge monographic exhibition dedicated to the work of Pablo Atchugarry, the famous Uruguayan sculptor, who has been divided between Italy, the United States and Uruguay since the 1970s, will be held in the hall of the Caryatids at the Royal Palace from 27th October until 31 January 2022.
Promoted and produced by the Municipality of Milan, Palazzo Reale, Skira Editore and Euromobil Group, Zalf, Désirée, the exhibition is curated by the art critic Marco Meneguzzo, in collaboration with the artist, and created in the setting by Reggiani for the lighting design.
The exhibition aims to be a point of reflection and a tribute to the great career of Pablo Atchugarry, a sculptor who with his international fame, the curriculum of exhibitions, the presence in the most important collections in the world, and his global market results, constitutes the true example of an artist who was able to concentrate the globalized taste of all collectors and experts in the world in his work. An activity that in the last twenty years has focused on large marble sculptures - all worked and sculpted personally - which are now giving way to reflections always on the sinuous and linear forms of nature, but carved directly into the wood or emerging from trunks of secular olive trees, the very latest production
“There are many secrets. I once wrote that marble has a thin and delicate voice, but if we are attentive and have the patience to listen to it, it tells us several secrets that could be suggestions on how to work it, or how far to go and what are its limits ...
So in this reading, one has the task of really listening, to know which part of the surface he will choose, if he can really take it off or leave it, before being able to do it concretely.
So these secrets mean truly entering the interiority of the material and it is then that you breathe, almost in unison, with the rhythm marked by the marble. So this is a universe." Pablo Atchugarry states in an interview released in 2006 and republished among the texts in the catalog.
The exhibition translates a project that is particularly complex in various aspects, including the weight and number of works - over 40, which vary over the years of production -, which interact with the very present and evocative architecture of the Cariatidi room, which it still bears the marks of the fire that devastated it during the war. This too is the "life of matter", which gives the exhibition its title.
An important, unique exhibition, a dutiful homage from Milan, the first city to be visited by a young Uruguayan artist who had just arrived in Italy, in the early 1970s
The exhibition is accompanied by an impressive exhibition catalog, and a precious "limited edition" in 60 copies, each containing a wooden sculpture created by the artist, published by Skira.

Pablo Atchugarry (Montevideo, 1954), is an Uruguayan artist.
In 1979 at Carrara he created his first marble sculpture after experimenting with different materials. In 1982 he moved to Lecco, where he still lives and works and here he begins to work on his first monumental project, in Carrara marble.
In 2002 for his artistic career he won the "Michelangelo" prize.
In 2003 he is at the fiftieth International Art Exhibition - the Venice Biennale. In 2007 the Pablo Atchugarry Foundation was born in Manantiales (Punta del Este) in Uruguay. In 2013 he published the first volume of the General Catalog of sculpture, which catalogs all the sculptures of the artist from the period 1971-2013, followed by the second and third volumes until 2018.
Exhibitions, installations and commissions revolve around this genius of contemporary sculpture.
In 2018 he created the Pablo Atchugarry Foundation in Miami and the construction of a huge contemporary art museum in the Foundation's promenade in Manantiales, not far from Montevideo, his hometown, is still under construction.