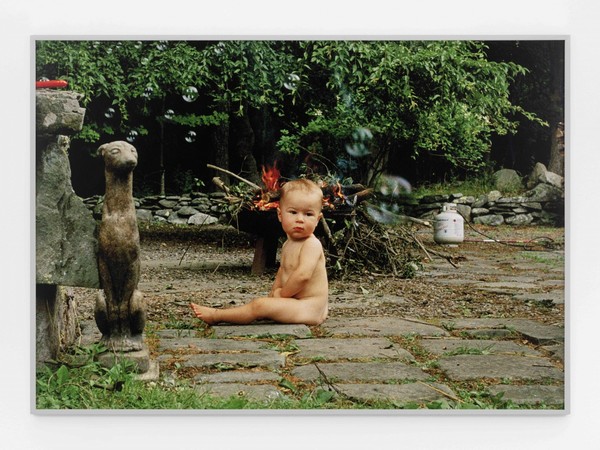 kaufmann repetto Milan is pleased to announce a solo exhibition by Talia Chetrit.
Chetrit’s selection of photographs for her sixth show with the gallery maps out a new perspective by shifting the focus from a predominantly auto-referential practice to a more contemplative authorial agency. Deeply reflective of the ubiquity of images in the digital age, Chetrit looks at the relationship between photographer and subject, and investigates the impact of time on the narrative properties of an image.
The show presents sixteen works, divided between black-and-white and color photographs. While most of the color images are dated from 2021 or shortly before, the majority of the black-and-white photographs were taken during the 1990s, when the artist was still a teenager. Though Chetrit has shuffled photographs from her archives in past exhibitions, here she selects from 27 years of image making with a new approach, collapsing time with less constraints. Some are early examples of Chetrit’s staged photography – like Murder Picture #6 or the still life Butterfly - while others are experimentations in portraiture as in Angel and Raver and Hippie. Although retrieving the material from her archive, Chetrit edited, cropped and printed these works for this exhibition. The deliberate choices and interventions re-activate the images and make them available for the artist’s current concerns which are not bound to any timeline. People closest to her – family, partners, friends (that already characterized in Chetrit’s early works) resurface in the recent photographs. The primary colors blue and red intriguingly pervade the color photographs: in the Bathroom interior snapshot, in the portraits of her mother clad in an ambiguous outfit as well as in the stunning surrealist composition of Coat Rack. Only in two images of the exhibition do photographer and subject coincide: in the Teenager/Self-portrait from 1996 and in New, a close-up picture of Chetrit’s lower abdomen, showing the bandage following a C-section which the artist underwent in 2019 to give birth to her son. Time is also addressed in Daphne Nails, here captured as a child, but whom we have met before as a teenager in past exhibitions of Chetrit.   The significance of Chetrit’s teenage works has changed over time, as the work is recontextualized. Bringing together images spanning over two decades suggests that the reading is not limited to the moment of image making but is allowed to unfold in the liminal space of atemporality.

What Chetrit is asking you is to look at photography.