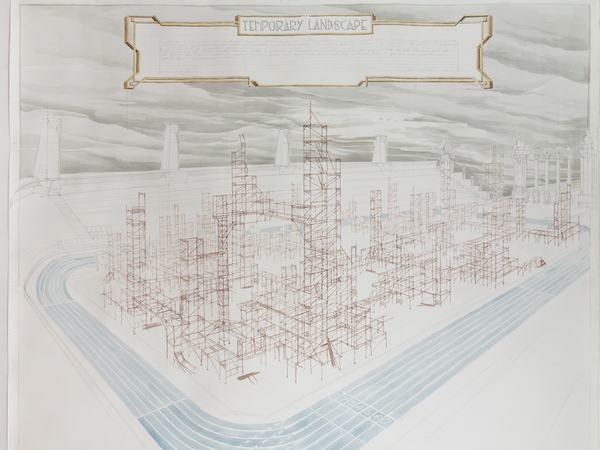 On Friday 5th November 2021 and within the framework of Artissima, the PAV is delighted to open Eugenio Tibaldi’s solo exhibition entitled Temporary Landscape, Herbaria, maps and diaries.
Curated by Marco Scotini, the exhibition focuses its attention on the artist’s graphic works as a hybrid method embracing aesthetics, photography, architectural design and reflections on theory. This method presents itself as a heterogeneous model of knowledge and environmental intervention capable of recording the ecological transformations of our times on a micro-scale, with the aim, substantially, of finding a precarious and never definitive correspondence between a fractured reality and its temporary representation, between humankind and the environment.

If it is true that the research by Eugenio Tibaldi focuses on the informal dynamics of the appropriation of space and on attention to marginal territories, it is equally true that this new exhibition revolves around the graphic diary, called Heidi, that the artist produced during the pandemic, where the rejection of the rhetoric of an uncontaminated nature accompanies the, equally categorical, rejection of the neo-liberal and extractivist plan which, as such, can undoubtedly not be cured by a mythical lost world. On the contrary, in Tibaldi’s practice both the concept of porosity that Walter Benjamin and Asja Lacis identified in Naples and their friend Alfred Sohn-Rethel’s “philosophy of the broken” conceived in the same city in the 1920s are at work.

Tibaldi’s attention to peripheral areas always focuses on the wealth of biodiversities and on what that the artist defines as their “aesthetic outcomes”, a collection of informal, vernacular solutions to the needs of the inhabitants, created by the latter in an entirely spontaneous and autonomous way: Tibaldi explores, analyzes and samples them, constructing the elements of an inventory that he goes on to stratify within his works, making first the macro-dynamics, then the details of a complex relationship between legality, economics, society and aesthetics emerge.  The production of space and its practice allows the understanding of the ecosystem as a level of relationships in which existences and the environment dynamically modify and reciprocally invent each other. “The peripheral areas” the artist claims, “with their ‘non boundaries’, lend themselves to entering into a relationship with human material according to ‘other’ than central dynamics, giving rise to often unforeseen, adaptive solutions and coinhabiting between the parts”. In this area of ecologies of the margins, Tibaldi enacts a bricoleur type practice, moved by a desire for the de-professionalization and reappropriation of the autonomous and collective powers that have been removed by capitalism.

Tibaldi has created participative projects linked to the social dynamics of the territory in numerous cities throughout the world, such as: the Tabula Rasa project in Bolzano, My personal bridge on Istanbul’s Galata Bridge, Transit in Thessaloniki or Anthropogenic Connection (2020) in Addis Ababa.  The Neapolitan hinterland, where the artist has lived at length, has a special role within his concepts, constituting the experiential matrix of an aesthetic reflection re-applied to various contexts, a method of looking laterally, of second possibilities: a work method that valorizes centrifugal, out-of-control and difficult to normalize movements.

Within this optic and, as per the exhibition’s title, every landscape cannot help but be temporary: Tibaldi underscores this by highlighting the timings imposed by the unauthorized developments inherent in commercial building practices, concentrating, in particular, on “those structures that, although destined to last only a few months, become definitive, part of a landscape, such as impounded construction sites, never finished illegal cement constructions, buildings that testify to an anomalous situation and which, due to their static nature become the landscape and lead us to modify our “aesthetic” confines. However, as Deleuze and Guattari would have said, our way of living also cannot help but be nomadic, very far from a “State science”.

In the context of the exhibition, PAV Educational and Training Activities / AEF propose to the public the lab "Archaeologies of landscapes and shadows". PAV territory - as a transformed area, from which numerous anthropogenic finds have been obtained, as witnesses of the industrial heritage - will be investigate, in relation to Tibaldi's research. In the laboratory, the inert materials resurfaced on the surface are collected and cataloged and, in the name of a total transformation, are used for the construction of silhouettes of new landscapes.
Reservations are required to participate in the activities: 011 3182235 - lab@parcoartevivente.it