Meals artist: the cultural and professional figure of the artist - table 1 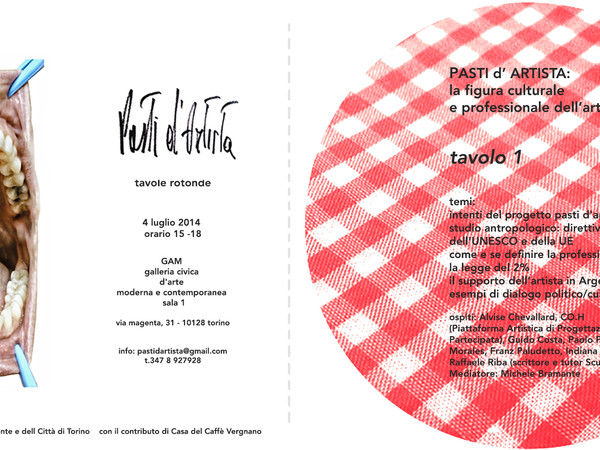 Friday, July 4th at 3 pm, a new stage for the GAM Meals Artist, a pilot project, the brainchild of the artist Giada Pucci for the creation of a fund for the arts in Italy. During the round table will discuss the cultural and professional figure of the artist. The meeting was moderated by Michael Bramante, will participate Alvise Chevallard, to CO.H, artistic platform of participatory planning, Guido Costa, Paul Facelli, Ernesto Morales, Franz Paludetto, Indiana Raffaelli and Raffaele Riba. Meals artist, a competition open to artists working in the territory of Piedmont, born from the idea that art and culture represent an essential nutrient for the company and for this reason it is necessary to support a project that artists feeding them, in the true sense of the word. Put food vouchers up for grabs is the provocative choice of Jade Pucci, that with this announcement lets out a cry of alarm and focuses on the condition of the artist in Italy; The project takes the form of a contest (open until August 31) to select a maximum of 20 participants, strictly over 35 (in total contrast to the competitions that usually cater to a much younger target), they will get good meal to use in various food and beverage outlets in Turin. They are part of the project a series of cultural initiatives, the 4th of July is the first encounter, such as comparisons with artists, debates and panel discussions on the topics of culture, public / private financing, the financial support of the artists, the legislation and rights / protections of artists. The intent is to create a dialogue with the institutions focusing attention on the figure of the artist recalling the principles of the UNESCO Recommendation of 1980 and the subsequent European Parliament Resolutions of 1999 and 2007 recognizing art a major role in life, the development of man and society, and stresses the need to formulate and implement a legal and institutional framework to support the creation of art. Meals Artist also reflects on the peripheral figure of the artist, where the periphery is physical and mental at the same time. The value and importance of the suburbs as a place yet to be determined and dwell; a free territory to explore, with a good range of movement and creation is a fundamental part of the operation. The suburbs are also new geographical destinations for cultural tourism, places that are not yet subject to gentrification, where it is important to give to the people and not just the tools to interpret and thus participating in the operations of the refund will be made by artists such as performances, meetings, round tables and much more.