Modigliani and the Bohème of Paris 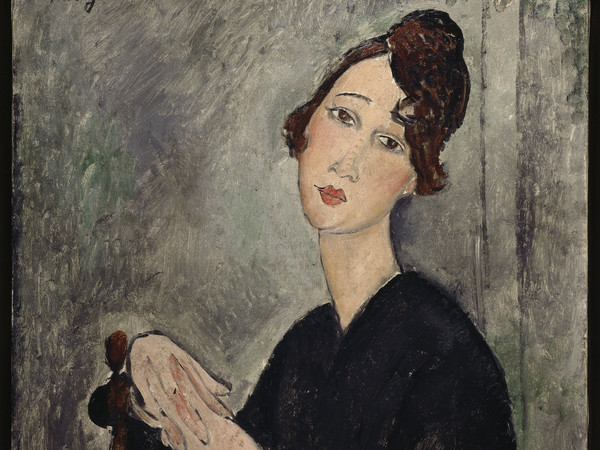 The 2015 season of exhibitions at GAM in Turin continues with a unique protagonist: Amedeo Modigliani, in an itinerary that helps to discover the work of the man who perhaps more than anyone embodies the figure of '"cursed artist", still considered one of the great interpreters of European painting of the twentieth century.
Will be exhibited approximately 90 works, including sixty masterpieces from the Musée National d'Art Moderne - Centre Pompidou in Paris and from major public and private collections in Europe. The exhibition is sponsored by the GAM and produced by MondoMostre and Skira Editore in collaboration with the Musée National d'Art Moderne - Centre Pompidou in Paris. The scientific curatorship is entrusted to Jean-Michel Bouhours, Modigliani accredited scholar and curator of the department of modern collections of the Centre Pompidou in Paris.
Around the central figure of Modigliani presents the extraordinary cultural atmosphere created by the "Ecole de Paris", the current players had some artists active in the postwar period, often exiled Jews persecuted in their country of origin, which gathered around Montmartre and Montparnasse united by the desire to live right in the artistic and cultural climate of Paris, creating a complete symbiosis between life and art, and distinguished by a personal style and a dissolute life and unregulated.
It starts from a significant body of work of the Centre Pompidou in Paris, in which collections Modigliani became part already in the mid '30s. These include the beautiful portraits of his friends (The young boy red 1919), of his mistresses (Lolotte 1917) or its merchants, along with paintings, drawings and sculptures from other prestigious public and private collections and from a painting of collections of GAM, the famous Red Girl of 1915. In these paintings emerges the famous "Style Modigliani" characterized by extreme synthesis, so that the characters portrayed are not revealed in their identity, except for some details, like clothes or hairstyles.
The exhibition is built in five sections, which analyze the vitality of the Parisian period, with an eye not only to painting, but also to the design that gave rise to the masterpieces, and with an eye to the sculpture in which the protagonist, along with Modigliani , is Constantin Brancusi, the sculptor in whose atelier Amedeo will work for a long time. Among the works on display in this section the famous Princess X and Mademoiselle Pogany III, next to a series of original photographs that Brancusi himself snapped to his works.
Modigliani is told on display as the main witness of the reality of cosmopolitan Parisian Bohème, which marked its independence from the movements of the official artistic avant-garde. A particular historical moment, to the creation of masterpieces, alongside a life of misery and alcohol, combined with the premature death, have helped to wrap the figure aura of legend.