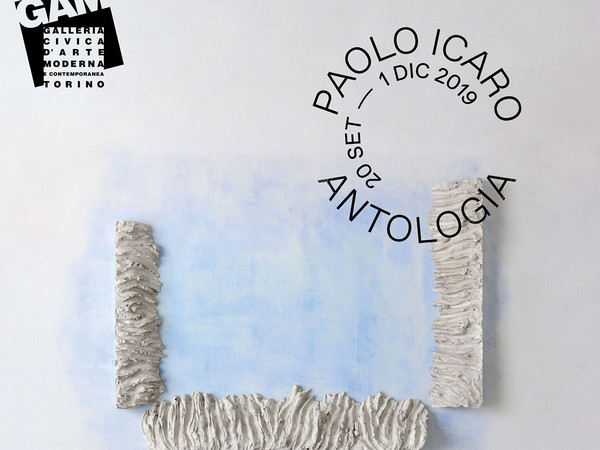 Times: Tuesday to Sunday: 10.00 am – 6.00 pm; closed Monday The ticket office shuts one hour before the museum


GAM – Galleria Civica d’Arte Moderna e Contemporanea is delighted to pay tribute to Paolo Icaro, one of the most important figures of Italian art in the past decades, with a survey exhibition that narrates 55 years of his work, from 1964 to 2019, summarized in around fifty works, some made specifically for this event.
This homage has been increasingly anticipated over the past years, due to the growing interest that critics, museums, and especially young generations of artists and curators have shown for his practice. GAM is proud to host this exhibition in the city where he began his personal and professional story as an artist and to hold, for the first time in a museum, a show that explores the different stages of his work up to his most recent creations.
“The exhibition offers a reassessment of Icaro’s work and aims to show the continuity and evolution of the artist’s poetics across the decades – as the curator states – his most personal style, a constant reflection that incessantly rereads space and sculpturein light of a transcendental principle for which the life of forms coincides with the sense of becoming, where the sensible world is illuminated by the life force of everything, where nothing is seen in the aseptic and atemporal light of ideas, but instead all is born in the flow of time, all comes to the light of the world intermingled with the universal and the human. This is a show in which the path tends to complete itself and start again on itself, in which the creative energies are expressed in a crescendo where each seed of reflection speaks even after years with developments of untiring vitality.”
The exhibition has been organized over time, in a constant relationship of attention on the part of the museum for the work of an artist who became part of the GAM collections over fifty years ago, in 1967, with Bicilindrica, in cement and from 1965, acquired with the group of works of the Museo Sperimentale by Eugenio Battisti. Subsequently, in the 2000s, another six works of important historical value were also acquired to represent his practice from the early 1980s, thanks to the financial support of the City of Turin and the Fondazione per l’Arte Moderna e Contemporanea, CRT.

This survey show is also an opportunity to publish a catalogue with Corraini that gathers together installation views in the museum’s rooms in an attempt to capture a glimpse of the special relationship the artist’s works possess with the venue and their relationship with one another from one room to the next. In addition to the essay by the curator Elena Volpato, I played among the rubble, the publication presents a text by Bernard Blistène, director of the Musée national d'art moderne du Centre Georges-Pompidou, PAOLO ICARO, an aesthetic of the open work, and an essay by Lara Conte, The reinvention of the studio as sculptural practice.
We thank Galleria P420 in Bologna whose collaboration and support have made this exhibition possible.