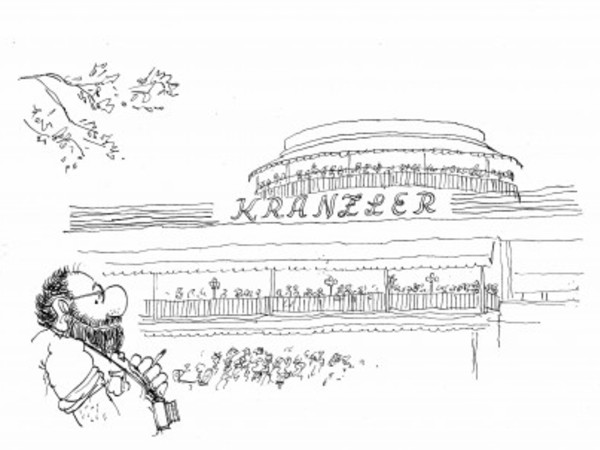 Wunderkammer Space of GAM in Turin, traditionally dedicated to the enhancement of the graphic of the museum, opens to receive a gripping unscheduled, devoting an exhibition in one of the best known and loved Italian satirical cartoonists, Sergio Staino. Both Staino that his most famous character, Bobo, are known to the general public since the late seventies, when the alter ego of the artist appeared for the first time in the pages of Linus. Since that time the character was featured on most of the Italian press. Bobo, light-hearted and ironic self-portrait of the author, summarizes the characteristics of an Italian middle class left, the symbol of a specific generation, sometimes nostalgic and utopian, watching the transformation of Italian society with irony and good sense, sparing moments of profound criticism.

The story that Bobo tells us in the halls of the GAM takes place in a single year, 1981, when the author goes to Berlin to tell the city with his drawings, at the invitation of Detlef Heikamp, an art historian Berlin remained pleasantly surprised by a cartoon published in Germany. And Bobo, often armed with a camera around his neck, he finds himself exploring a city of a thousand contradictions and great charm. A metropolis booming architectural and above all cultural, but inserted in the heart of European communism. As told by the same Staino "Every corner was a discovery, a surprise, a suggestion: Berlin in those years there was a city truly unique for the amount of political and social contradictions that made coexist in itself (...)" That in the drawings we often see the star that is between trendy cafes like any curious tourist, looking almost lost commercial buildings with neon signs and shops of KaDeWe overflowing with goods, and finds himself face to face with tourists looking for Christiane F around the Bahnhof Zoo. Meet the same Berliners, also disoriented in the face of destruction and reconstruction of the urban fabric, and some other immersed in a new reality: they are the Hausbesetzer, young occupants of vacant houses, organized into real "common" where Bobo also dreams of a life of solidarity and social libertarian.

But all this "new advances" is contrasted with another Berlin: some drawings have Bobo protagonist who becomes instead a careful observer. And these cartoons are presented with a sudden more scathing and gloomy, are populated by characters restless, inconsolable widows, are often depicted places near or over the wall, with police and riot squads, events or simple urban landscapes of bleak suburbs. And the windows in Kurfürstendam, no longer glittering but destroyed by the fighting. Staino says: "Approaching the border with the Democratic Republic, and especially to the wall, the atmosphere of the city became more dark and depressing and the contradiction between the vitality luxurious Western and Eastern sadness police were made evident. (...) It is no coincidence that the drawings of Berlin are closed on these aspects of struggle, violence, raids, grass smoking, dinners and frugal vegetarian but also, of course, dreams, love and so much poetry "