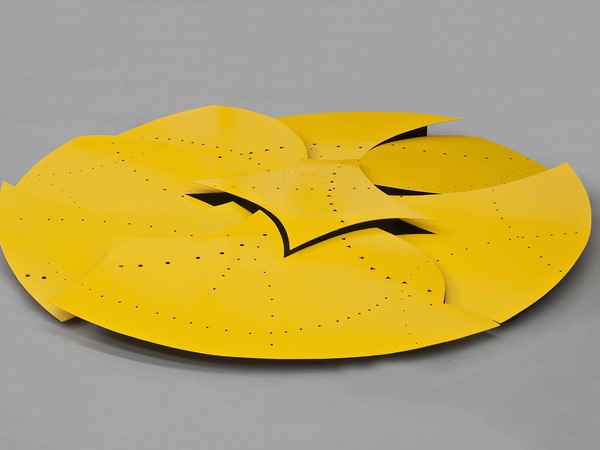 Back visible to the public, after the recent restoration generously supported by the Friends of Fondazione Torino Musei, the great Lucio Fontana Concetto Spaziale of 1952: the project Wunderkammer of GAM, edited by Virginia Bertone, Italian-Argentine artist dedicates an exhibition bringing together, after many years, some of his most significant works in the collections of the museum.
The commitment to achieve exposures that act as incentives to the rediscovery and appreciation of heritage in general and the Prints and Drawings GAM in particular is confirmed in this new appointment curated by Danilo Eccher, Wunderkammer staunch supporter of the project started in 2009.
With the great yellow disk of Concetto Spaziale, Lucio Fontana (Rosario Santa Fe 1899 - Comabbio 1968) has revolutionized the way we think about sculpture: a spirit of anti-monumental, the work is spread over a totally horizontal dimension, combining eight thin metal sheets shaped and drilled a saturated yellow and brilliant. The choice of a strongly anti-naturalistic color from the artist, then, was to create a surreal contrast in its original location on a lawn, with blades of grass sticking out of the holes. The recent restoration has allowed the participation of Spatial Concept at Paris exhibition Lucio Fontana. Rétrospective at the Musée d'Art Moderne de la Ville (25 April to 24 August 2014).
True icon of the collections of the GAM, the work is placed in dialogue with the two Concetto spaziale Teatrini, Attese and with 30 precious drawings, long since exposed, donated by Teresita Rasini Fontana at the first major retrospective of the artist held its own in GAM in 1970. Through the sheets on display, ranging from 1946 to the early sixties, you can get to the heart of the creative workshop of Fontana, who experiments in design reasons to play on canvas or in sculpture.
Without being preparatory studies, these designs are a reminder of ideas found leaving the hand free to slide on the sheet, which will then become graffiti marks, cuts, holes, or silhouettes of various shapes and texture.

From one sheet to another, the artist creates a constellation of traces that refer to the image of outer space (hence the name "Spatialism" given to the movement that gave birth after World War II): are sometimes series points that reconstruct geometric patterns, sometimes linear tracks that leave the hand freedom of movement in conducting the pen, pencil or brush on the paper, creating shapes or vortices or spirals. As all the work of Fontana, they are, as he himself wrote in the Manifesto Blanco 1947, pure "aerial image, universal, suspended."

Wunderkammer of GAM is an extraordinary opportunity to bring one of the most fruitful research of Lucio Fontana, in which the artist experiments with different materials the opportunity to go beyond the diaphragm surface (canvas, paper, metal) for engage the viewer in an experience that exceeds the physical work by opening new horizons.
A dizzying flight forward that reflects the fascination with outer space of galaxies, the first space exploration and technological modernity also capable of feeding with its stimuli extraordinary laboratory of ideas, theories and artistic achievements of which Fontana was architect.
The exhibition is accompanied by a publication with texts by Virginia Bertone, curator of collections and head of Prints and Drawings of the GAM and Luke Peter Nicoletti, art historian.