Manolo Valdés. Art as a Pretext 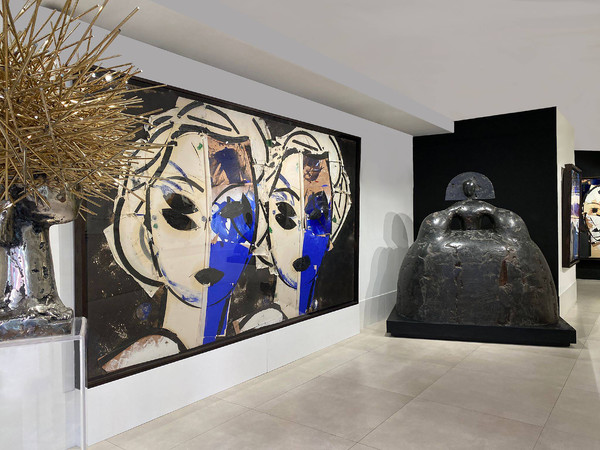 Contini Art Gallery is pleased to announce the solo exhibition by Manolo Valdés that will be held at Calle Larga XXII Marzo 2288, in Venice. – Among the most important masters of the twenty-first century, Manolo Valdés is an eclectic and polyhedric artist, whose innovative expressive and formal research integrates references from the history of art.
The exhibition brings together artworks that explore his creative universe, showcasing a series of the most compelling art pieces of his life-long career, including his iconic female portraits. The scene is dominated by magnificent paintings, large-scale collages, charming sculptures depicting women’s faces and equestrian subjects, which are reproduced in aluminum, bronze, iron, wood, alabaster and resin. The vivid and vibrant visual language, the study of raw materials, the personalized pictorial realism, the use of multidimensional layers and large-scale canvases: these are just a few of the traits that make the artist’s style instantly recognizable. An example is the marvelous sculpture Butterflies, which represents a woman’s face whose hair develops into a tangle of butterflies, giving an extraordinary extension to the work, both in width and depth. Layering and three-dimensionality are also visible in his paintings, such as Desnudo I, a large-scale collage in which Valdés depicts a reclining female figure by using with essential forms.
As a starting point for his artistic process, Valdés reinterprets the most famous masterpieces in the history of Western art in a contemporary way, those created by the illustrious masters Velázquez, Rembrandt, and Matisse. The Las Meninas series are among the artist's most significant sculptures, inspired by Diego Velázquez's homonymous painting. They feature a recurring personalized representation of the infant Margherita, which is taken out of context and transformed to be three-dimensional; the new version appears to be enriched with a vitality unknown to the original one, while it retains its intrinsic royalty at the same time. Therefore, the artist acts like an image hunter: he chooses a subject and a central theme; then, he declines its various meanings, and he develops it in series, thus giving us a unique and current image.
Valdés is an artist capable of showing the magnificence of Art: in fact, in his paintings and sculptures we can perceive how his passion for art drives him to create new expressive languages by testing unusual materials, pasty and bituminous colors, luminous details and raw materials that transform his canvases into multi-dimensional, textured and full-bodied objects; similarly, working with wood, precious alabaster, bronze and resins, he gives life to beautiful and unusual sculptures.
Contini Art Gallery will be showcasing the artworks of the Master from April 18th, and it will offer a stimulating overview of the different techniques used, and the multiform experiments made by one of the major exponents of the international contemporary art scene.

Manolo Valdes was born in Valencia, Spain, in 1942. At the young age of 15, he was already an apprentice as a painter while enrolled at the San Carlos Academy of Fine Arts in Valencia. During his years of studies, during a trip to Paris, he came across the visual and artistic freedom of Pierre Soulages and Robert Rauschenberg. In 1964, he began his artistic career by co-founding the group Equipo Crónica, collaborating with Juan Antonio Toledo and Rafael Solbes: this pioneering Spanish Pop Art group fostered creative experimentation and political criticism. After this experience, which lasted until 1981, he began to have his solo shows. Valdés has been mostly focused on reinterpreting artistic and historical themes without provocative references, creating its own visionary universe through this inspiration, associated with the study of materials. Winner, among many others, of the Premio Nacional de Bellas Artes España, his creations have been featured in numerous national and international exhibitions. In 2007, he was also awarded the title of Officer of the Order of Merit by the President of the French Republic. The works of Manolo Valdés can be found in numerous public and private collections, such as: the Metropolitan Museum of Art (New York), the Museum of Modern Art (New York), the George Pompidou Center National Museum of Modern Art (Paris), the Queen Sofía National Museum Center for the Arts (Madrid, Spain), The Guggenheim Foundation (Bilbao, Spain), the Valenciano Institute of Modern Art and the Julio Gonzalez Center (Valencia, Spain), the Kunsthalle (Kiel, Germany), Kunstmuseum (Berlin, Germany), the Veranneman Foundation (Krisuhoutem, Belgium), The National Art Museum of China (Beijing, China), Les Terrasses du Casino (Monte Carlo) and in many other locations.
Since 2016, Valdés has collaborated with the Contini Art Gallery, which represents him exclusively in Italy. He currently lives and works in New York.
Inauguration on Saturday, April 30th, 2022 - 6.30 pm.