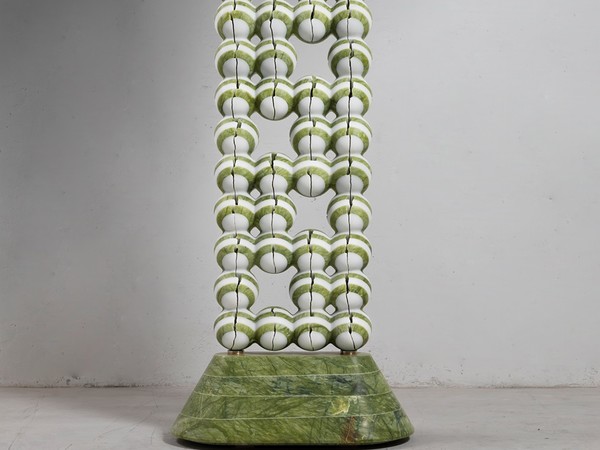 After the success of the two open-air summer exhibitions "Infinita fluidità della pietra” (“The infinite fluidity of the Stone”), set up on the lively seafront of Viareggio, and "dal Mare all’Infinito", organized in Forte dei Marmi, at Bagno Alpemare beach resort owned by the Bocelli family, the Contini Art Gallery is pleased to present "nell’Infinito dell’Arte", solo exhibition by the Korean sculptor Park Eun Sun. The exhibition will be held at our gallery in Venice, in Calle Larga XXII Marzo, and, subsequently, in our gallery Cortina d'Ampezzo, located in the heart of the town.

Acclaimed internationally for its sculptural production, Park Eun Sun creates works that combine his Eastern origins with his inspiration coming from the Western artistic tradition, all of which are characterized by a profoundly contemporary appearance.

This exhibition features a rich selection of works, composed of different materials and sizes. They trace the evolution of the artist's process, beginning with the study of the material – either marble, granite or bronze – and finishing with the creation of sinuous and smooth geometric shaped sculptures, sustained by unusual yet graceful and harmonious balances.   Park creates dynamic sculptures in which he works the material – especially the stone – by alternating two colors and stratifying them in an ascent movement, like in the case of his twisted and spiral-shaped columns which, developing in height, seem to pursue infinity, or with his chained spherical compositions that resemble the vital flow of DNA.

Therefore, his energetic artistic production demonstrates how skillful interweaving of lines and shapes, expansion of volumes and almost scientific technical precision can guarantee the creation of a very personal artistic language that is capable of communicating to the collective.

In fact, Park's message is universal: the artist investigates the very essence of the human being, the complexity of life and its experiences; this is evident in the distinctive element of all his creations - the wound.
Park's sculptures, in fact, are all united by a split: marble and granite are shaped, polished, then deconstructed, cracked and reassembled.

The "lacerations" flow down the fluid surfaces, like scars that symbolize suffering and the very essence of human experience, allowing the observer to enter the sensitive and expressive sphere of the artist.

An example of this is Colonna Infinita - Accrescimento I (2020), a pillar in white marble and gray epoxy that, whirling on itself, extends upwards with a supple and continuous movement that does not seem to want to stop.
The silky and cold surface is entirely covered by a fracture that creates chiaroscuro effects, shadows and lights reflections, juxtapositions of voids and solids, capturing the gaze and inviting the observer to investigate the inside, thus touching their most intimate and personal part.

Park’s predilection for stone leads to masterpieces that combine opposites: smoothness and fracture, harmony and imbalance, dynamism and geometry, as in the work Due Colonne (2014), made of black and gray marble. This sculpture starts with a solid column pedestal that undergoes a change going upwards by splitting itself into two arms, both of which are composed of spheres. Duplicazione I, Duplicazione II, Duplicazione III (2021) are sculptural compositions of superimposed spheres that create a sort of a portal from which viewers can investigate an interior dimension, while Duplicazione continua (2019) presents itself as a vertical structure that, with its concatenation of globular shapes, seems to multiply indefinitely in a perpetual mutation that unfolds before the attentive eyes of the viewer.

Park Eun Sun presents his sculptures to the viewers as abstract, geometric, intangible figures, which reveal their universal message soon after, thanks to their delicate and engaging poetics and their contemporary and recognizable expressions of matter, form, composition and deconstruction, embodying the metaphor of living.   Park Eun Sun was born in 1965 in Mokpo in South Korea. The discovery of painting comes very early in the life of the artist who dreams of becoming a great painter.
Over the years, Park Eun Sun has participated in and won many painting competitions for children, his parents thus allowing him to devote himself to art freely. After moving to Seoul, he enrolled in the degree course to become an arts teacher at Kyung Hee University.
The importance dedicated to form and matter brings him closer to the study of sculpture, thus leading him to change his studies at the University of Kyung Hee, passing from painting to sculpture. The discovery of materials passes from the initial use of clay to marble and later to granite.
In 1993 he moves to Pietrasanta (LU), where he continues his studies at the Academy of Fine Arts in Carrara.
His first solo exhibitions were held in Florence in 1995, in Munich in 1996 and in Seoul in 1997.
Park's sculpture develops in the concept of space expressed by oriental cultures through the abrasion of the surface where cracks, gashes and cuts coexist, symbolizing the opening of the human interior and, at the same time, the total destruction of matter.
Park has exhibited in galleries and museums in Italy (Florence, Genoa, Pietrasanta, Rome, Turin, Verona, Padua, Milan) and abroad (Belgium, Korea, France, Germany, England, Luxembourg, Holland, Panama, Poland, Singapore, United States and Switzerland).
He currently works between Europe, South Korea and the Americas. In 2020, he was awarded the Honorary Citizenship of the city of Pietrasanta. Contini Art Gallery exclusively represents the artist since 2021.

Inauguration on Saturday, October 16th, 2021 at 6.30 pm with the presence of the artist