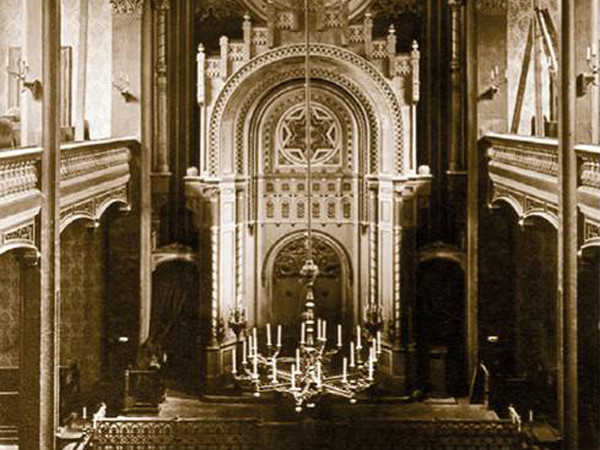 With the exhibition Zagreb Synagogue 1867-1942-2015 staged in the Jewish Museum of Venice, the Jewish Community of Zagreb want to pay tribute to Remembrance Day and for seventy years after the liberation of the concentration camps of Auschwitz.
The Jewish community in Zagreb was founded in 1806 and the synagogue was built in 1867 to coincide with the rise of the cultural and social community. The synagogue was one of the first official buildings of the new center of Zagreb, defined by all the chroniclers of a monument of the city. The temple was and continued to be the spiritual and symbolic for Judaism in Zagreb.
The decision of the demolition of the synagogue was dismissed with the explanation that "it is part of the urban plan of the city." The demolition lasted from autumn 1941 until the late spring of 1942 and it came with primitive means, almost bare hands. The destruction of the synagogue is a symbol of the tragedy of the Jews of Zagreb and Croatia, for which the Holocaust began with the establishment of the Independent State of Croatia April 10, 1941. At that time there were 11,000 Jews in Zagreb and only five percent survived the greatest tragedy of the Jewish people.
The survivors of the concentration camps, the anti-fascist struggle of liberation and any other exile met in Zagreb in May 1945, being in front of the ruins. With patience and determination gradually rebuilt the life of the small community that he found himself gradually decreased due to the continuous departures for Israel just created.
In the nineties of the last century we have experienced great changes related to political and social events of our country: the Jewish Community of Zagreb has become a meeting place for the Jewish communities of the Republic of Croatia. Today is strong and looks forward to the future in the spirit of tradition, with care for its history and in the memory of Holocaust victims. Despite our synagogue missing for seventy years as part of the city, still exists in our hearts and in our minds: the plan is to build in its place a building that will link between the past, present and future.
The exhibition is divided into two parts. The first contains the choice of the panels of the exhibition "Synagogue of Zagreb - reliquiae reliquiarum" (1996) and illustrates the amount of time since the founding of the Community to the demolition of the synagogue. In the second part is contained in the record images from the period after 1945 to the present, in which the center of gravity is the memory and the synagogue. Two documentary films are dedicated to the history and fate of the synagogue and the third to judaica in possession of the Jewish Community of Zagreb. In the course of the exhibition will also present a selection of publications in English taken from the rich publishing activity of the Jewish Community of Zagreb.