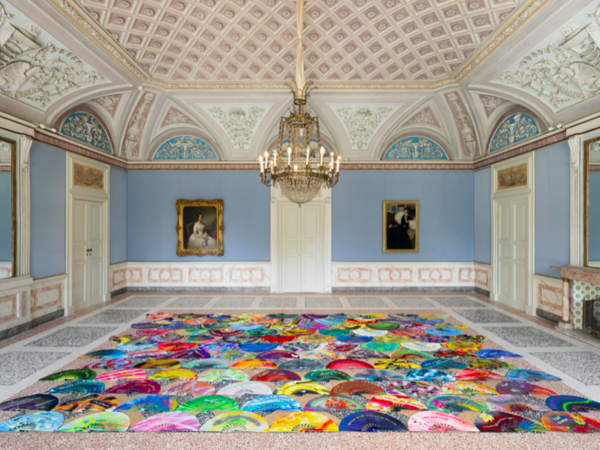 Andrea Bowers’s first solo show in an Italian institution, Moving in Space without Asking Permission offers an immersive experience within the work of the artist and her commitment to the struggle for gender equality and women’s emancipation.

Andrea Bowers is an American artist and activist whose research combines aesthetic practices and political engagement from a feminist perspective. For almost thirty years, the artist has investigated fundamental issues such as gender equality, women's and workers' rights, immigration, and environmentalism through a formal approach connoted by a strong visual impact. She makes use of a variety of media, from drawing to video to neon installations, rendering complex topics through an accessible and direct vocabulary. Her work is a perfect example of how art can convey socially relevant messages through the aesthetic power of its language.

The exhibition Moving in Space without Asking Permission is part of a broader reflection on feminism that Bowers has been developing for some time, and focuses in particular on the relationship between feminism and bodily autonomy, amplifying issues from the present and the past. Each of Bowers’s projects begins with in-depth research into the context in which she operates and an encounter with its social fabric. In this case, Moving in Space without Asking Permission takes its starting point from the artist’s confrontation with some of today’s Italian feminist experiences, in particular the work of the philosopher and activist Alessandra Chiricosta, who studies and teaches the practice of martial arts as a form of bodily self-awareness, thus offering a break with gender stereotypes. The project was also created in response to the specific nature of the GAM exhibition context: a museum whose collection refers to the historical period around the turn of the 20th century, when the women’s emancipation movement in Italy was in its infancy.

Through a show that combines iconic works and ambitious new productions that, among other things, testify to the artist’s great versatility of artistic language, the exhibition highlights the importance of her research in which political activism and artistic practice are inextricably linked.

Furla Series – Andrea Bowers. Moving in Space without Asking Permission is the fourth edition of the Furla Series project, and is the upshot of collaboration between Fondazione Furla and GAM: a partnership undertaken in 2021 with the exhibition by Nairy Baghramian and recently renewed for the staging of the upcoming events in the cycle.
Furla Seriesis theproject cycle that since 2017 has engaged Fondazione Furla in the creation of exhibitions in collaboration with major Italian art institutions, with an all-female program designed to valorize and showcase women’s fundamental contribution to contemporary culture.