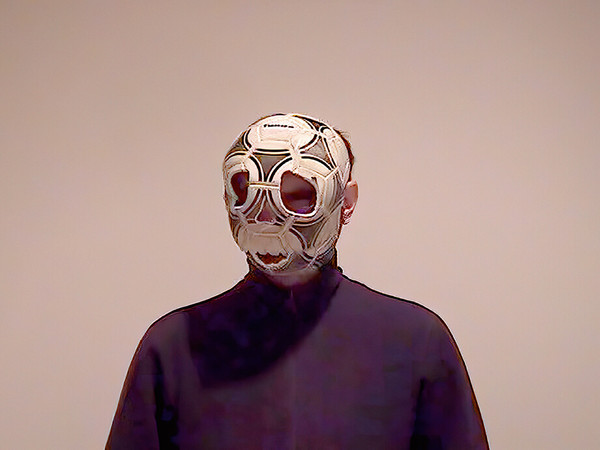 In Farces and Tirades, his first solo show in an Italian institution, Nicolás Guagnini presents over fifteen years of work, in an exhibition freely based on the dramaturgical structure of the commedia dell’arte. The works are the “masks”, the exhibition space the stage on which they improvise their “farces and tirades”. There is no single theme, no chronological or hierarchal division. Adhering to a simple scenario, the exhibition is organized in two acts—the first from 10 February, the second starting on 14 April 2022—in which the works-characters enter and exit, taking turns, changing their positions, relationships and attitudes.

A series of key works alternate over the course of the two acts, outlining recurring themes in the artist’s oeuvre—“from the unconscious to the market”, as he writes—while revealing the variety of media with which Guagnini experiments and expresses himself: video-performance (Discharge, 2005; Tango 78, 2010; Clear Allegiance, 2012; Analysis, 2019) and slide-projection-installation (The Middle Class Goes to Heaven, 2005–2006), printing (the wallpaper Notes on Dickface, 2014), painting (77 Testicular Imprints, 2007), sculpture (the vitrified and glazed ceramics of Points of View and Raft, 2014; Aphasia Bagatelle, Decurion, Divinity School—The Ice Queen, and Passionate Pilgrim, 2016). Throughout the exhibition, the floor of the room will be almost entirely covered by an installation of sheets of paper, printed with a conversation between the artist and Luca Lo Pinto: the scenario of this comedy, made available to its audience, at their feet.

A versatile figure—artist, curator, writer, teacher—Nicolás Guagnini has also been the founder, in New York, of the independent film company Union Gaucha Productions (1997–2010), and of Orchard (2005–2008), a gallery-space on the Lower East Side, run as a collaboration of a group of artists, art historians, critics, curators, and filmmakers. The complex social and economic context in which the artist operates, all the symbols and normative discourses in which he is embroiled, become constituent factors in his work, together with traumatic episodes from his childhood in Argentina, and questions about desire, the body and masculinity. All these contradictory and neurotic elements mingle, repeat, reflect and cross each other in different media, and thanks to the alternation of irony and subversion—just as in the commedia dell’arte—they explode into dreadful therapeutic laughter.

Nicolás Guagnini (Buenos Aires, 1966) is an Argentine artist who lives and works in New York. His works are included in the collections of the Whitney Museum of American Art, Centre Pompidou in Paris, and the Museums of Modern Art of Buenos Aires and São Paulo. His writing has been published in many international magazines, including October, Texte zur Kunst, Artforum, and in exhibition catalogues from MoMA New York and the Whitney Museum.
Opening 10 February, from 6 pm to 9 pm