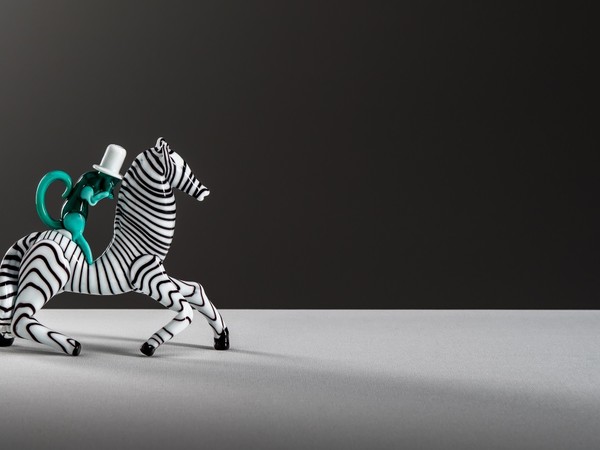 An innovative graphic designer, illustrator, caricaturist, Fulvio Bianconi was one of the most prolific artists to work in collaboration with the Venini glassware company – especially during the Fifties  – designing pieces that would become true icons of Murano artistic glassmaking
The exhibition “Fulvio Bianconi at Venini”, curated by Marino Barovier, will open to the public on the Island of San Giorgio Maggiore on September 13th, 2015 and will run until January 10th, 2016. It is the fourth exhibition dedicated to the history of the Venini glassware company, organized by LE STANZE DEL VETRO, a long-term cultural initiative launched by Fondazione Giorgio Cini and Pentagram Stiftung devoted to the study and the promotion of the art of glassmaking in the 20th and 21st centuries. With over 300 works, the exhibition “Fulvio Bianconi at Venini” aims to give a comprehensive description of the fruitful and long-lasting collaboration between the artist and the famous Murano glassware company. Fulvio Bianconi (Padua, 1915 – Milan, 1996) arrived in Murano in 1946 to design perfume bottles for the company Giviemme. He then began his collaboration with the Venini glassware company, which would continue until the mid Fifties and episodically during the Sixties, and then again between the end of the Eighties and the early Nineties. During all those years Bianconi and Paolo Venini established a fruitful relationship, based on mutual respect and enthusiasm, which led Bianconi to have a strong influence on the production of the glassware company. Bianconi focussed on pieces with sophisticated shapes, characterized by strong colours, designing striking works, some of which sum up the enthusiasm of the “fabulous” Fifties, and later became true icons of Murano glassmaking.
Thanks to the unprecedented documentation from the Venini Archive and to the collaboration with private collectors, as well as with Italian and foreign museums, the exhibition “Fulvio Bianconi at Venini” features the complete glass production designed by Bianconi for the Venini glassware company. Many of these works were acclaimed at the Venice Biennale and at the Milan Triennale, as well as at other travelling exhibitions in Europe and the USA during the Fifties, and reveal Bianconi’s extraordinary curiosity and innovative skills, his interest in the use of strong colours as well as his ironic and playful creative nature.