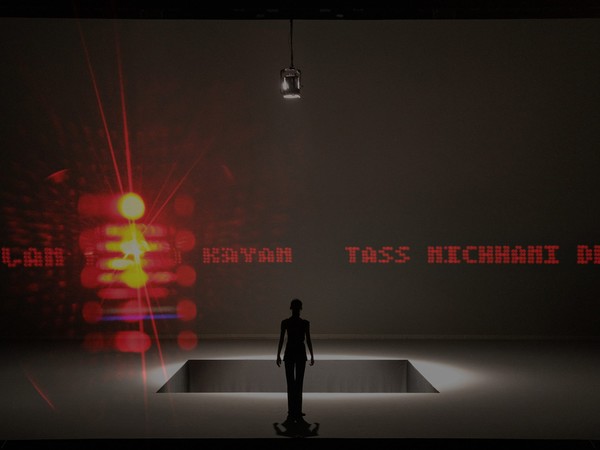 Place: The Japan Pavilion at the Giardini

The Japan Foundation will organize the Japan Pavilion exhibition at the 59th International Art Exhibition La Biennale di Venezia, which will take place from April 23 to November 27, 2022. The exhibition will feature the world premiere of “2022,” a new work by Dump Type, a pioneering art collective engaged primarily in installations, video works, and performances in museums and theaters both in Japan and overseas. Before opening to the public, an opening reception will be held at the Japan Pavilion on April 20, 2022, and the pre -opening will be held from April 20 to 22.

2022
A new work by the artist collective Dumb Type.
Mirrors on four stands rotate at high speed, reflecting lasers trained on them to project text onto the surrounding walls. The projected texts are all taken from an 1850s geography textbook, posing simple yet universal questions. The sounds of voices reading the texts are emitted from rotating parametric speakers, becoming highly directional beams of sound that travel around the room. In contrast to the discourses that surround it, the center of the room is an empty space—a place that exists nowhere, but at the same time a place that could be anywhere. We live in a time of post truth and liminal spaces. The center is void.
DUMB TYPE   Founded in 1984, Dumb Type is comprised of artists from diverse backgrounds—visual art, music, video, dance, design, programming and other fields—all contributing to a great variety of stage and installation productions over the years. They have maintained an open- ended creative style with no fixed director and a changing roster of members participating in each new production as part of their on- going exploration of ever new possibilities in artistic collaboration. Since its formation, Dumb Type has worked toward a broadening of the possibilities for artistic expression. Derived from the diversity of its members and from the different media the group uses, Dumb Type’s work ranges across such diverse media as art exhibitions, performances and live music concerts. Their interdisciplinar y efforts continue to transcend existing genres of fine art, theater and dance. Regardless of genre, the essence of their work addresses a variety of social issues related to contemporary society, and the today’s technological reality on a global scale.
Their works has been presented in numerous festivals and exhibitions, including the Guggenheim Museum Soho, New York (1994), Hong Kong Arts Festival (1996), Barbican Centre, London (1998), Walker Art Center, Minneapolis (1999), Museum of Contemporary Art, Chicago (1999), New National Theatre, Tokyo (2000), Singapore Arts Festival (2002), Venice Biennale (2003), Seoul International Modern Dance Festival (2005), Melbourne International Arts Festival (2006), Martin-Gropius-Bau, Berlin (2007), The Athens Concert Hall (2009), Romaeuropa, Palazzo delle Esposizioni (2017), solo exhibition at Centre Pompidou-Metz, France (2018) and Museum of Contemporary Art Tokyo (2019), among others.
The Dumb Type Exhibition at Haus der Kunst Munich will be held from May 6 to September 11, 2022.