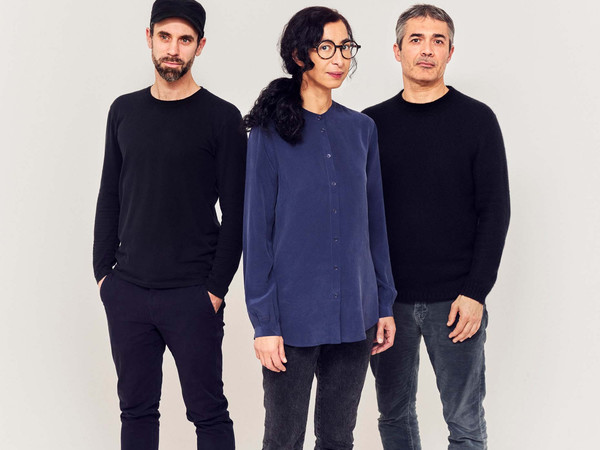 The Swiss Arts Council Pro Helvetia is delighted to announce details of the Pavilion of Switzerland exhibition at the 59th International Art Exhibition – La Biennale di Venezia. The exhibition titled The Concert, is conceived by Latifa Echakhch, in collaboration with percussionist and composer Alexandre Babel and curator Francesco Stocchi.
Gloomy remnants of art fill the first space, where visitors set out on a counterclockwise journey through time. In each room, the atmosphere changes – time runs backwards, from broad daylight to the evening before. Ever more recognizably inspired by folk sculpture and customs, the sculptures, filling the whole space, are increasingly veiled by a spreading darkness.
These are scenes of impermanence, of catharsis, with which installation artist Latifa Echakhch captivates visitors of the Pavilion of Switzerland at this year's Biennale Arte, scenes that bring to the fore the cycle of life in a multi-layered and complex way. Most of the material used for the exhibition is itself part of a transformation, recycled from previous biennales.

Between ritual and rhythm
The artist Latifa Echakhch, who lives in Switzerland, evokes the ritual fires that are common in many cultures. They include the lighting of straw dolls for the St. John's fire, which is supposed to protect against demons and diseases around the solstice at the end of June or, in Switzerland, the burning of the “Böögg” on Zurich's Sechseläutenplatz to bid farewell to the winter season. Fire is always both the end and the beginning on a constantly turning wheel of time.
Latifa Echakhch also enters into a dialogue with the building designed by Bruno Giacometti in 1951. The artist revisits its architectural program and appropriates the entirety of its spaces, exploring their relationship to light and the different sounds that emerge from them.
The exhibition plays with harmonies and dissonances, with the mixed feelings of expectation, fulfilment and disappearance. The sculptures are part of an orchestrated and enveloping experience, a rhythmic and spatial proposal that allows viewers to experience a fuller perception of time and of their own body.
“We want visitors to leave the exhibition with the same feeling they have when they come out of a concert. That this rhythm, those fragments of memory, still echo,” says Latifa Echakhch. “The Biennale is an eruption of artistic greatness every time. A wave that culminates in a cathartic grandeur only to then recede, leaving a deserted landscape of abandoned buildings.” Through the exhibition, Latifa Echakhch raises the question whether art, similar to music, only begins to exist once silence and emptiness take over.
Project book and record
The exhibition will be accompanied by a record and a book functioning as a reflection of the discussions that guided the project. The book presents archival material, interviews and critical texts, including theoretical considerations around sound, rhythm and the notion of a total work of art. As such, it will constitute an additional dimension in the understanding of the exhibition.
Latifa Echakhch is co-represented by Dvir Gallery, kamel mennour, kaufmann repetto and Pace Gallery.
Latifa Echakhch
Born in 1974 in El Khnansa (Morocco), Latifa Echakhch lives and works in Vevey and Martigny (Switzerland). Driven by the necessity to counter certain prejudices, contradictions, and stereotypes in our society, she isolates and questions materials that symbolize these phenomena. In 2007, Echakhch presented A chaque stencil une révolution at Le Magasin, Grenoble, as part of her first solo museum exhibition. Latifa Echakhch’s work has since been presented around theworld in numerous solo exhibitions: at Kunsthaus in Zurich, the Centre Pompidou in Paris, the New National Museum of Monaco, Memmo Foundation in Rome, KIOSK in Ghent, the macLYON in Lyon, the Hammer Museum in Los Angeles, Portikus in Frankfurt, Columbus museum of Art in Ohio, MACBA in Barcelona, FRI ART in Fribourg, Frac Champagne-Ardenne in Reims, Swiss Institute in New York, Tate Modern in London, Le Magasin in Grenoble; as well as in group exhibitions. They have also been exhibited at the Istanbul Biennial, the 54th International Art Exhibition – La Biennale di Venezia, the 11th Sharjah Biennial, the Jerusalem Art Focus Biennial and the Manifesta 7 in Bolzano. Echakhch won the Marcel Duchamp Prize in 2013. As Alfred Pacquement, then-Director of the Centre Pompidou and head of the jury for the award, said of the artist at the time: “Her work, between surrealism and conceptualism, questions with economy and precision the importance of symbols and reflects the fragility of modernism.” In 2015, Echakhch presented Screen Shot at the Museum Haus Konstruktiv, Zurich, and was awarded the Zurich Art Prize.

Alexandre Babel
Born in 1980 in Geneva, lives in Berlin and Geneva
As a drummer, composer and curator, Alexandre Babel is regarded as an authority in the experimental music scene, and in the interpretation of the 20th and 21st century repertoire. His innovative projects break through the borders of musical convention, confounding listener expectations in the conquest of new contexts. Alexandre Babel has worked with a large number of bands and artists, including the ensemble KNM Berlin, ensemble Musikfabrik, the noise rock band Sudden Infant, Anthony Pateras, Caspar Brötzmann, Carol Robinson, Tristan Perich, Félicia Atkinson and Ryoji Ikeda. In 2020 the monographic Festival Les Amplitudes in La Chaux-de-Fonds focused on Babel’s compositional and curatorial work. Babel is currently the artistic director of the contemporary percussion collective Eklekto. He is a laureate of the Swiss Music Prize 2021.