Mikhail Roginsky. Beyond the Red Door 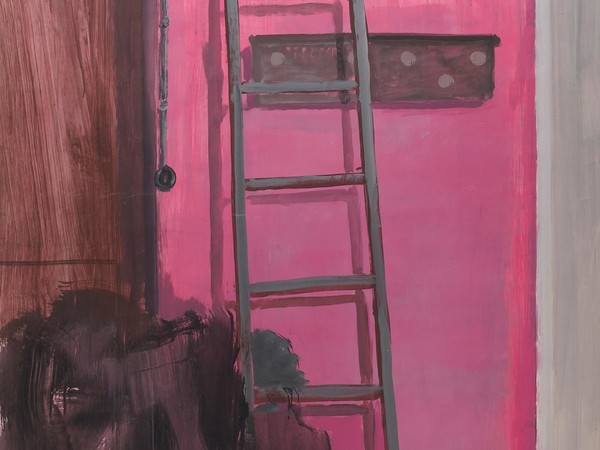 From 7 June to 23 November at Ca' Foscari will be the first Italian exhibition of Mikhail Roginsky, the "father of Russian pop art".
The exhibition "Mikhail Roginsky . Beyond the Red Door" is organized by the University of Venice and by the Mikhail Roginsky Foundation as part of  14.Biennale of Architecture in Venice.
The choice of Elena Rudenko, curator of the exhibition ( Commissioner of the project: Ekaterina Kondranina ; Scientific Directors : Prof. Silvia Burini and Prof. Giuseppe Barbieri) is clear: the exhibition focus on mature works of the artist (1978-2003). The span of years when Mikhail Roginsky lived in Paris. This crucial period Roginsky be so broadly investigated, with a focus on painting and the structural concepts inherent to it: color, shape, construction.
The exhibition, and it is no accident , starts to work before the Paris season. With the "Red Door" ( 1965) which belongs to the Soviet period of the artist and that he is certainly one of the most famous creations but also one of the more obscure . The "door" is ideally what the artist crosses, leaving the cliché of politicized artist , devoted to complex concepts, to arrive just to new areas of the painting.
Often viewed by critics as an object of the readymade, the "Port" instead advocates his own passage to the painting, the artist himself underlined the close link of this with easel painting .
With " The Red Door " Roginsky declares the will to overcome any artistic conventionality of language dominance. The work represented, the postwar Soviet Union, one of the first attempts to de- construction of the two-dimensionality of the picture surface.
Here are the premises of his manifesto antiestetismo, artist aversion to the very word "art", which he understood as a complex of things created artificially, withered by age-old use of, or burdened by the weight of a hypocritical ideology.
The curators propose to leave out the door the accumulation of erroneous definitions, to dismiss the stereotypes that have distorted the perception of the work , returning to its roots. The exhibition unfolds as a tale of the complex evolutionary process of the artist, the reason for this association is conducting the journey as a metaphor for the creative journey.
It is a journey without a schema consequential, deputy to simplify the understanding of the work of Roginsky. The artist is presented in all its breadth and unity of the creative framework is not based on the element chronological but the visuals of the show.
From space with still lifes semiastratte on the shelves, which exceed the figurative, the viewer goes to a minimalist still life represented by simple "portraits" of simple, steadfast in their plastic certainty. From the room with the large acrylic works on paper, which simulate the imperturbability of painting "high" and interpret it so ironic its main genres, the viewer enters nell'alterato , striking expressionist world, which attempts to give a voice shouted, through art, to the troubled process of loss of harmony. All along the 8 sections in which 120 works are presented along with a broad array of photographic images and videos ( many previously unpublished ) . To document a path that starts from the moment in which the artist makes use of the ABC of painting again , looking for pure colors and mixed , the correlations between the volumes, the compositional rhythm. To arrive at the final stage of the research and its very existence. When the frequent falls at home stimulate a new change in his painting . The Moscow Soviet and post-Soviet acquires the same value of artistic fact that Paris had for the Impressionists or the deep America for Edward Hopper. The Moscow Mikhail Roginsky, a world inspired by his memory and imagination, pushes the viewer to the " recognition " of places, situations and real characters . By stimulating the viewer to perceive the paintings as a two-dimensional consideration of reality.