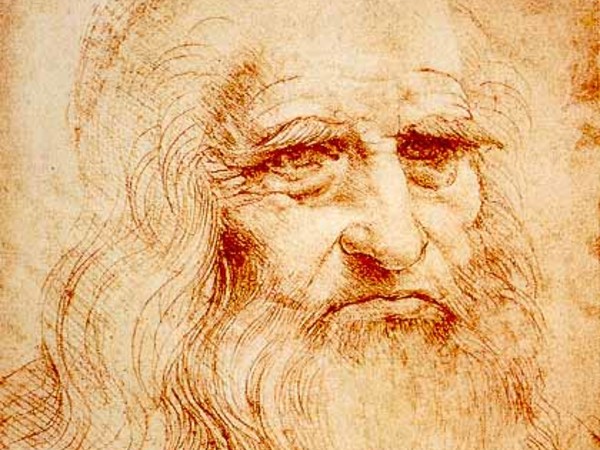 Son of notary sir Pier da Vinci, at seventeen he followed his father to Florence. Here he studied with Verrocchio and trained in technical skills.
In 1482 he moved to Milan, under the court of Ludovico Sforza (also known as Ludovico il Moro), where he remained for approximately twenty years. He set up feast furnishings, was engineer and town planner and painted extensively. In this period he painted: the Virgin of the Rocks (Louvre, Paris), painted in his famous sfumato technique in a limited colour palette, showing the distance of Leonardo from Tuscan models; the Last Supper (Refettorio di Santa Maria delle Grazie, Milan), which was one of the Renaissance masterpieces and the Lady with an ermine (Czartoryski Museum,Cracow). The Lombard cultural setting offered him numerous new spurs and he passionately devoted himself to studying architecture, hydraulics, mechanics, anatomy and botany. He was fascinated with the movement of water and the flight of birds, so much so that some of the most interesting machines he invented were flying machines. With the downfall of House of Sforza (1500) he returned to Florence, where he entered the service of Cesare Borgia acting as a military engineer: that was his opportunity to travel and study.
In those years he painted the Battle of Anghiari for Palazzo Vecchio, but, dissatisfied with it, he gave it up together with perhaps the Mona Lisa (Louvre, Paris), an intimate and mysterious smiling figure. In 1505 he returned to Milan, where he devoted an increasingly large part of his time to studying science. Called to Rome by the House of Medici, he was actually excluded from the major works and lived secluded. He moved to France in 1517, at the service of Francis I, where he spent his last years in the manor house Clos Lucé.
The life of the Tuscan genius was spent in the name of constant reflection and research. His main focus was the relationship between art, nature and knowledge: scientific investigation and artistic creation go hand in hand to discover nature-governing universal laws. The artist must experience reality and reproduce its spirit in his works. The consequence of this vision is not just the recurrent incompleteness of his works, because his curiosity was never satisfied, but also the need to represent his scientific studies in drawings. The number of his drawings which has made it to this day is outstanding, accompanying his equally numerous notes. One of his most famous drawings, the Vitruvian Man (Gallerie dell'Accademia, Venice), is a study of the proportions of the human body. His paintings were admired and studied by the greatest painters of the century and Vasari recognised him as the initiator of a mature Renaissance.