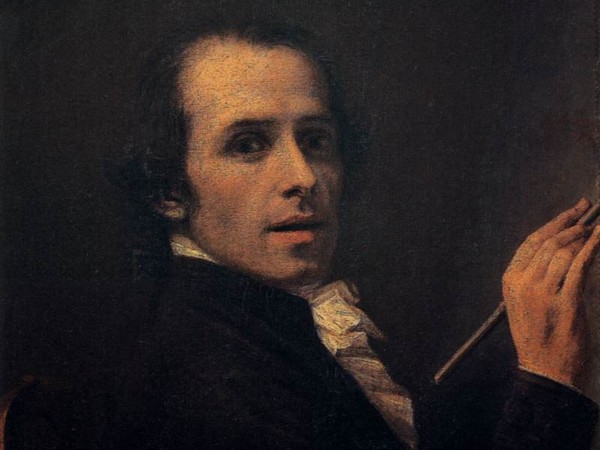 Antonio Canova was born in Possagno, near Treviso, on 1 November 1757. His father died early on, and when his mother remarried and moved to a town nearby, he was placed in the care of his paternal grandfather, a skilled stonecutter and master mason, who taught him the basic principles of the trade. Since he showed an exceptional talent for sculpture, in 1768 he was sent to study as an apprentice in Venice, where he attended sculpture classes at the Public Academy of Nudes and where he produced his first works, which brought him a certain degree of fame on the local art scene (Orpheus and Euridice, 1773; Apollo; bust of P. Renier; Daedalus and Icarus, 1779). In 1779, he travelled to Rome, where he settled in 1781 and where he created his most beautiful works. There he studied classical sculpture, with which he had become familiar on his trips on Pompeii, Herculaneum and Paestum in 1780, and came into contact with artists and intellectuals who theorised about a return to the Classics. The influence of neoclassical ideals became ever more apparent in his art, beginning with works like Theseus and the Minotaur (1781-1783) and continuing with the series of sculptures, also of mythological subjects, produced at the end of the eighteenth century (Young Eros, Cupid and Psyche, Hebe, Venus and Adonis, Hercules and Lichas, The Three Graces), which brought him international recognition. His artwork was appreciated and coveted by patrons and ruling houses all across Europe. Between 1783 and 1810 he created the funeral monuments of Clement XIII and Clement XIV in Rome, Maria Christina of Austria in Vienna and Vittorio Alfieri in Florence. In the meantime, in 1798, when the French occupied Rome, he chose to leave the city to return to his home region, where he dedicated himself to painting. In just two years, he was able to produce many of the canvases and almost all of the distempers that are now housed in the Canova Museum, which was set up in the house where he was born in Possagno. In 1800, he returned to Rome where he set up home in the Spanish Square together with his brother Giambattista, who became his secretary. In 1804, when the Napoleonic period began, Canova was chosen as official portraitist to the Emperor, for whom he produced various works (including the sculpture of Napoleon represented as “Mars the Peacemaker”, now in Apsley House, the busts of Napoleon’s family members, the marble of Letizia Ramolino and the celebrated allegorical portrait of Pauline Bonaparte, represented as “Venus Victorious”). All the while his fame continued to grow. In 1802, he was appointed Inspector General of Fine Arts and Antiquities of the Papal State and was given responsibility for the preservation and exploitation of the artistic patrimony, a task assigned to him in his role as head of the Academy of San Luca. In 1815, he was in Paris where, thanks to a considerable degree of diplomatic skill, he was able to recover numerous and valuable works of art that had been stolen from Italy by Napoleon and return them to their country of origin. In the same year, the British government asked him for an opinion on the authenticity of the Elgin marbles. In recognition of his great efforts in defence of Italian art, Pope Pius VII bestowed upon him the title of Marquis of Ischia together with an annuity of three thousand scudos, which he bequeathed upon the art academies. In July 1819, he was in Possagno for the laying of the first stone of the parish church that he had designed for his community. However, this magnificent building, which now houses his remains, would only be completed ten years after his death, which occurred on 13 October 1822 in Venice.