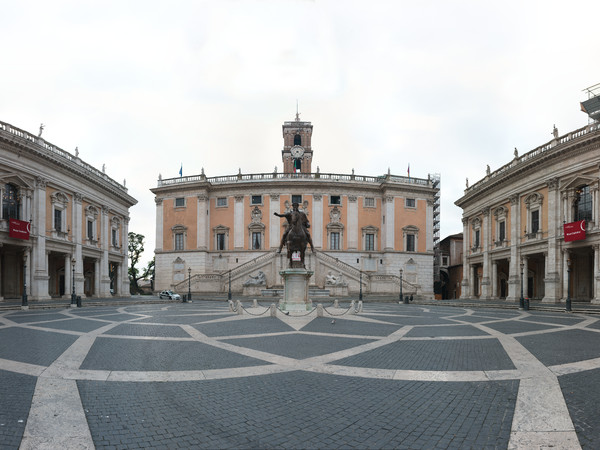 Built on the remnants of the  Tabularium and since the Middle Ages, the home of civil power in the city. Its look was the work of Michelangelo, who designed it for Paul III with its celebrated reversed perspective that, going up the Cordonata, allows one to see Palazzo dei Conservatori to the right, Palazzo Nuovo on the left and the Senate building in the background (with the classical statues of Minerva-Roma, Tevere e Nilo). The Dioscuri at the summit of the stair come from a temple dedicated to them, the statues of Constantine and Constans II are from the baths of Constantine. The images on the pavement of the building were created in 1940 by Antonio Muñoz, based on engravings from 1567. The Marcus Aurelius at the center is a copy of the original kept at the Capitoline Museums.
THINGS TO KNOW: On the Campidoglio (perhaps inside the Church of Aracoeli) Francesco Petrarca received the Laureate of Poet and Historian on 8 April 1341 from roman Senator Orso dell’Anguillara, after being examined in Naples by King Roberto d’Angiò. During the solemn ceremony, the poet, who, thanks to the laureate, could teach at the university, also received roman citizenship.
Tweet