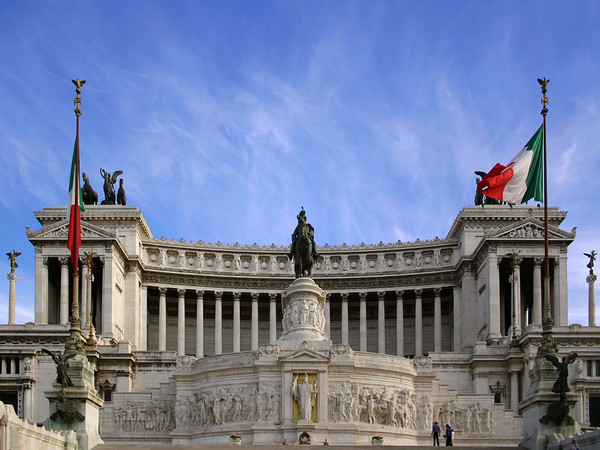 This is the monument to Vittorio Emanuele II, built by Giuseppe Sacconi starting in 1885 and inaugurated in 1911. It took on another title, Altar of the Fatherland, Altare della Patria, in 1921, when the tomb of the unknown soldier was placed here. It is a scenic backdrop to Via del Corso, but in building what romans sarcastically call “the typewriter”, many buildings were destroyed, including the Farnese Tower, part of the convent of Aracoeli, and numerous other buildings to make way for the grand Piazza Venezia.
The Vittoriano is home to the Museo del Risorgimento, the Sacrario delle Bandiere and hosts large art exhibitions of international importance.

THINGS TO KNOW: In February of 1911, for the inauguration of the monument, a banquet was held inside the stomach of the horse of the equestrian monument of Vittorio Emanuele II, attended by Mayor Torlonia, the owner of the foundry where the statue was made, Bastianelli, and 21 workers.