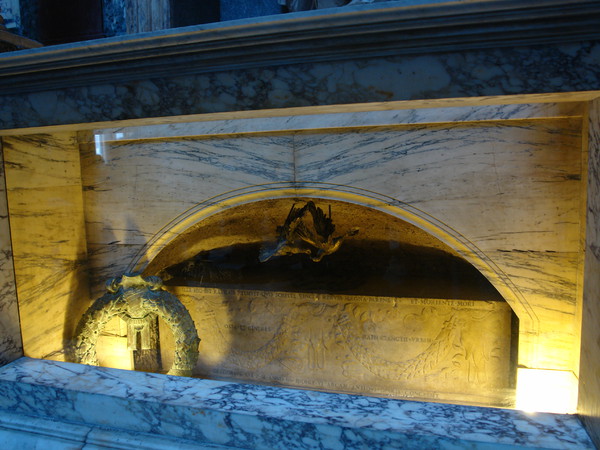 The Tomb of Raphael is at the Pantheon in Rome. Surmounted by the Madonna del Sasso, sculpted by Raphael's student, Lorenzetto, it presents the epitaph by Pietro Bembo which states «Here lies Raphael by whom Nature feared to be conquered while he lived, but now that he is dead, fears to die herself”.

To the right, a stone remembers Maria Bibbiena, fiancè of the painter, while on the left is a bust from the 1800s of Raphael, the work of Giuseppe Fabris (1833).
THINGS TO KNOW: When, in 1833,  successful digs were carried out to find the remains of Raphael,  Giuseppe Gioacchino Belli wrote a mocking sonnet: «Trovi uno schertro in de la terra smossa? Ebbè, ssenza de fa ttanti misteri,?Aributtelo drentro in de la fossa» - translated, more or less, “Find a skeleton in the dug-up ground? Not much to wonder, But throw it back to where it was found.”
Tweet