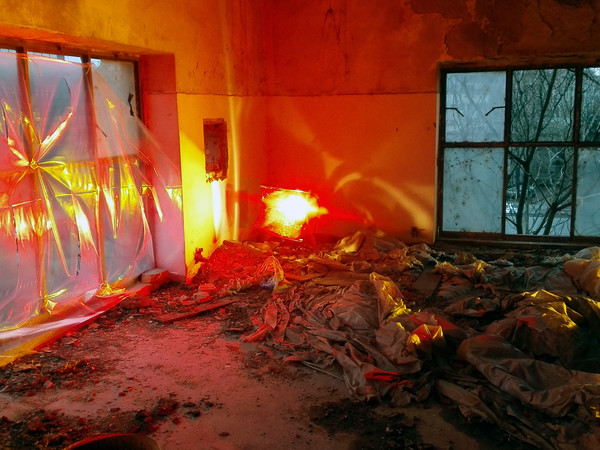 
Igor Grubić’s project for the Biennale, Traces of Disappearing in Three Acts (2006-2019), is thirteen years in the making. It consists of three inter-related photo essays and an animated film, set in a specially designed mise-en-scène. The project began in 2006 when the artist began documenting post-war, transitional reality in Croatia, particularly the fundamental shift from socialism to capitalism, from a central, stated-planned to a free market economy. It explores how this has affected changes in habitation, the urban fabric, public space and social relations.

Wild House, the first chapter or ‘Act’, examines changes in homes, living and public space with the privatisation of property and the consolidation of neo-liberalism in the country; Filigree Sidewalk (Act II), looks into traditional vocations such as local handcrafts and specialist workshops, highlighting which professions survive and which not in the new economic circumstances. Finally, Deconstruction of the Factory (Act III) presents a series of defunct factories, monumental reminders of the transition from industry to post-industry, and changing conditions of work. The latter also become the setting for Grubić’s short film, How Steel was Tempered, which weaves together issues of worker history, family bonds and generational shifts, suggesting also the importance of fruitful future relationships based on solidarity, shared social space and creative, collaborative working. The film has already received four awards. A newly edited version will be presented in Venice for the first time.

Grubić’s project sits firmly in the humanist dimension of documentary photography, bridging together poetics, politics and social reality. The project for the Biennale expands his already significant contribution into socially committed documentary work, and the preservation of the memory of Croatia’s architectural history, work and culture. Its scope is local but also ecumenical, analysing as it does the changes engendered by globalization, privatisation and the consolidation of neo-liberalism. Finally, it highlights the new situations that are coming to replace the old, while subtly inviting us to think about future ways of imagining – and inhabiting - our world.

Katerina Gregos is an independent curator, art historian and writer based in Brussels. She has curated numerous large-scale international exhibitions and biennials, including, among others: the 1st Riga Biennial, Everything Was Forever Until It Was No More (2018); the 5th Thessaloniki Biennial, Between the Pessimism of the Intellect and the Optimism of the Will (2015); Göteborg Biennial, The Politics of Play (2013); Manifesta 9, In the Deep of the Modern, Genk (2012). She has also curated two critically acclaimed national pavilions at the Venice Biennale: Belgium (2015) and Denmark (2011). Since 2016 Gregos is also curator of the non-profit, Munich-based Schwarz Foundation, for which she recently curated the exhibition Anatomy of Political Melancholy, at the Athens Conservatoire (2019).

A book with essays by Katerina Gregos and WHW designed by Rafaela Dražić is being produced for the occasion. The publication is supported by Kontakt Collection, Vienna.