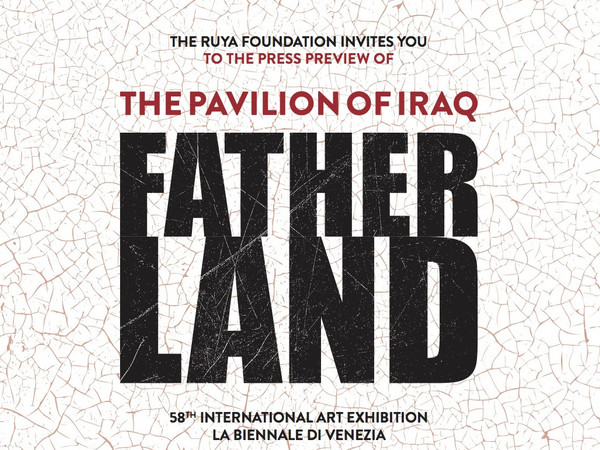 Orari: 10am-6pm, every day except Mondays


The Ruya Foundation is pleased to present the National Pavilion of Iraq at the 58th International Art Exhibition – LaBiennale di Venezia, 11 May to 24 November 2019. The exhibition, ‘Fatherland’, is a solo exhibition of new works by Iraqi-Kurdish artist Serwan Baran. This is the first time Iraq is represented by a solo artist. ‘Fatherland’ is the fourthoccasion on which the Ruya Foundation has commissioned the National Pavilion of Iraq at the International Art Exhibition – La Biennale di Venezia.
Iraqi-Kurdish artist Serwan Baran was born in Baghdad in 1968, and is considered part of the ‘new generation’ of Iraqipainters. He has lived through over 40 years of war in his country and was conscripted during conflicts in the 1980s and 1990s. During his time as a soldier and war artist, Baran was obligated to record the victories of the Iraqi army for government propaganda. His work became more expressionist when he began addressing his own military experience by deconstructing images of generals in grotesque, figural abstractions. Baran describes this artistic period as an attempt to silence “the nightmare inside me”.
The large-scale and site-specific works of ‘Fatherland’ invoke the feeling of a war zone upon entering, in line with Baran’ssignature dark and atmospheric style. The exhibition features a monumental acrylic painting, The Last Meal, depictinga bird’s-eye view of soldiers killed during their last meal. Elements of collage are incorporated, including objects from Iraqi military uniforms given to the artist by families of the deceased. These uniforms were collected from the Iran-Iraq War, the second Gulf War and the war with ISIS.
The exhibition also includes a sculpture, The Last General, a life-size clay replica of an army general inside a sunken life boat cast in fibreglass. The figure of the general is sculpted so that half of his body appears decayed, while the other half appears intact and wears a uniform and medals. The sculpture also includes elements of collage, using cloth from military uniforms. Resembling an ancient mummy in a sarcophagus, this clay coloured sculpture is intended as a reminder of the brutality of military leaders, as well as a tribute to perished men who have become part of the soil.
Iraq and the region have endured reigns of terror and authoritarian rule in the name of nationalist and religious ideologies, often driven by the need to wage war both in competition for, and in defence of, the ‘Fatherland’. The term al-watan(meaning ‘homeland’ or ‘nation’) is used by dictators in demagogic speeches and in fascist literature. The exhibition is a commentary on the masculine and paternalistic dimensions of political culture in Iraq and the region.

In particular, Baran seeks to interrogate the ways in which the notion of the ‘Fatherland’ has been used to justify the horrors of war, the soldier’s efforts, and a leader’s tactics. The soldier, often depicted as a valiant and obedient hero, is more often a victim of brutal authority. Through an examination of the abuse of the patria, the exhibition is also an exploration of the nature of man, his indulgence to his violent nature, and to his own dictatorial instincts that find an outlet through war.

Tamara Chalabi, Chair and Co-Founder of the Ruya Foundation and co-curator of the exhibition has said:

“It is an important development for this pavilion to have a solo artist represent Iraq for the first time. Serwan Baran’swork is fitting artistically, both as a deeply personal testimony of his own experiences and a universal commentary on the condition of mankind. I am pleased to also be sharing his singular expressionist style as a painter, in a medium thathas great significance within the history of modern Iraqi art.”

“Serwan Baran’s large-scale works are forceful denunciations of the horrors of war. They are meant to overwhelm the viewer, as one is overwhelmed in the proximity of a large film screen. His statement is not restrained, and the scale ofhis works is in perfect tune with the volume of his proclamation.”