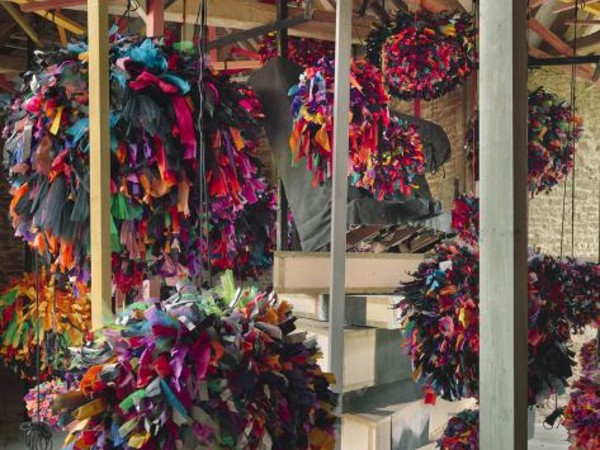 
Phyllida Barlow has been selected to represent Britain at the 57th International Art Exhibition – La Biennale di Venezia and she presents a major solo show in the British Pavilion.
Best known for her colossal sculptural projects, for over four decades Phyllida Barlow has employed a distinctive vocabulary of inexpensive materials such as plywood, cardboard, plaster, cement, fabric and paint to create striking sculptures and bold and expansive installations that confront the relationship between objects and the space that surrounds them. Drawing on memories of familiar objects from her surroundings, Barlow’s practice is grounded in an anti-monumental tradition characterised by her physical experience of handling materials in an expedient and direct way.

“It is an extraordinary privilege and honour to be invited to represent Britain at the Venice Biennale 2017. I am astonished, thrilled and, of course, hugely excited... The international diversity for which the Biennale is so renowned within the particular context of Venice is a unique and stimulating creative opportunity beyond my wildest dreams."
Phyllida Barlow

The Commissioner of the British Pavilion is Emma Dexter, Director Visual Arts, British Council. The exhibition is commissioned by the British Council for the 57th International Art Exhibition of La Biennale di Venezia 2017 and has been made possible with support from Hauser & Wirth.