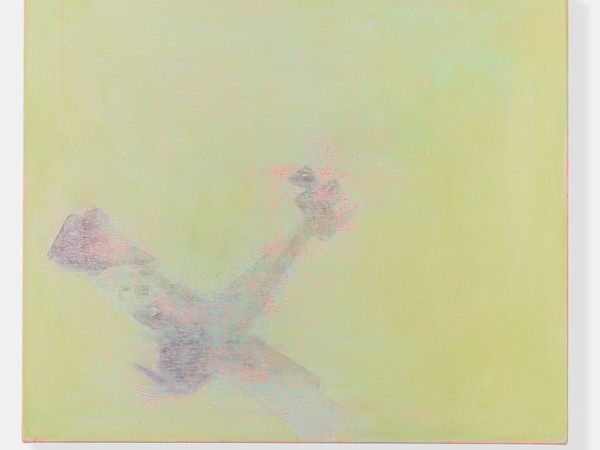 Luogo: A plus A Gallery


TJ Boulting, London is delighted to present ‘Consequences' on show at A plus A Gallery, Venice, as part of a collaboration where the two galleries will host each other’s exhibitions. The title relates to the game where a story is constructed from individual words or phrases passed from person to person, which is then revealed at the end. It also refers to the exchange of the two gallery spaces, where control of the outcome is passed from one to the other, and the history of TJ Boulting as emerging from its publishing side Trolley Books, which was originally founded in Venice in 2001. ‘Consequences’ presents four UK based artists, and explores the visible and invisible processes and connections between the individual works and artists. The works are predominantly painting, and move between the four artists connecting ideas of abstraction, the figurative, form, colour and material, to create a final cohesive whole.

As a starting point, Rachel Howard and Boo Saville’s works often incorporate visual representations that evoke emotional responses, with both the abstract and figurative imbued with a curiosity of the human condition. In Howard’s series of plane crashes, the downward spiral of the fuselage is in one just made out as a hinted shadow, whilst in another the plane is more literal, painted among flashes of neon ground beneath a lemon sherbet haze. The tragedy is ephemeral but deeply rooted in our psychological response. It is an abstract depiction, but of something human and tangible. Neither wholly abstract or wholly figurative, her works move back and forth between the two refusing to settle. The use of paint is visceral and physical, but also an exploration of the formal, in other works grids are created out of skins of paint, and in one a bold red circle is dropped on top to disrupt it like a meteorite plunging the surface of the moon.

Boo Saville’s works encompass figurative, detailed biro drawings alongside abstract colour field paintings, large-scale canvases that harness layers and layers of thin oil mixed into brightly coloured serene hues. The paintings embrace the lack of any subject, and use colour to channel a purely joyful emotional response. An ethereal lightness, with titles tethering the planetary, stellar and lunar. Whilst her biro drawings continue to be grounded in the real, the factual – images sourced from the internet, meticulously reproduced in coloured biro, beautiful flowers that in fact are deadly – Oleander, Pheasant Eye, Bloodflower – for this show there is Broom, a common shrub with a bright yellow flower that can cause heart attacks.

Michaela Yearwood-Dan’s paintings employ colour and the floral but with a personal self-reflection and exploration of her own identity. They are an emotional landscape, and often incorporate fragments of her thoughts like poetry or a personal diary. One work employs purely red paint, the swirls of the botanical and words hinting at love, pain, nostalgia and violence.
HelenA Pritchard studied painting but in recent years has moved towards formal exploration with materials, often found objects with structures that she incorporates into the compositions – meshes, packaging, plastic film, fabric – as well as traditional painting mediums oil paint and gesso. She makes formal art objects from simple materials of the every day, treating all matter with equal importance. The work invites a reappraisal, partly based on recognition, partly on an aesthetic response. The overall intention is to make sense of the fabricated world inventively, to create harmony through the infinite interactions between space and form.

HelenA Pritchard (born 1975, South Africa, lives and works UK)
HelenA Pritchard studied painting at the Royal College of Art, London, and was the recipient of the Stanley Spencer Scholarship. She had a recent solo shows at TJ Boulting (2016), The Hospital Club (2018) and Waterside Contemporary (2019) and was the inaugural winner of the Evening Standard Art Prize in 2017. She lives and works in London.

Boo Saville (born 1980, lives and works UK)
Boo Saville studied at the Slade School of Art, London, graduating in 2004. In 2007 she was a nominee for the Sovereign Painting Prize, and in the summer of 2008 she completed a residency in Paris at the Cite des Arts. In Spring 2013, her work was shown in a survey of new British artists at the Museum of Contemporary Canadian Art, Toronto and was acquired by the Museum of New and Old Art, Tazmania.
She featured in Francesca Gavin’s book ‘Hell Bound: New Gothic Art’ as well as ‘100 New Artists’ on British artists under 35 years old creating the aesthetics of the next decade. In 2018 she was part of three artist show at Newport Street Gallery, London. Saville is represented by TJ Boulting in London where she has had four solo shows. She lives and works in Margate.

Michaela Yearwood-Dan (born 1994, Lives and works UK)
Michaela Yearwood-Dan graduated from a BA in Painting in 2016 from Brighton University. She was selected as one of the Bloomberg New Contemporaries in 2017, which travelled to London and Gateshead, then compelted a year-long residency at Sarabande: The Lee Alexander McQueen Foundation, London. Awards and residencies include 2019 Future Assembly with VANSA residency, Johannesburg, London and Lagos, 2018-19 Bloomberg New Contemporaries studio bursary in partnership with Sarabande: The Lee Alexander McQueen Foundation, London. Her first solo show was at Tiwani Contemporary, London in 2019.