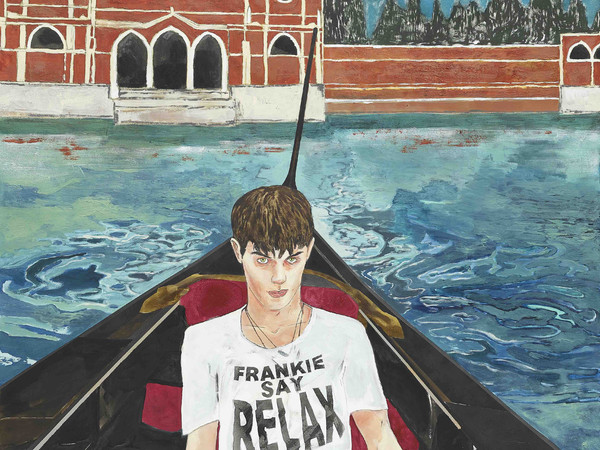 The exhibition, which includes a decorative room screen and several large-scale works on paper, weaves characteristically expansive lines of enquiry around themes of privacy, mourning and seclusion, and the physical, emotional and symbolic conduits between the living and the dead. Its anchor point, conceptual and physical, is A Private Morning, 2020, a folding screen lined on one side with a classic black moiré fabric, a pattern produced since the Middle Ages but popularised by Queen Victoria during her ‘eternal mourning’ period following the death of Prince Albert. Replacing ‘mourning’ with ‘morning’, Bas invites viewers to observe a contemporary private moment, perhaps a period of seclusion as mourning is sometimes known, alluded to in the painted side of the screen, which depicts a lone male figure, wearing a black T-shirt and surrounded by flowers that, in various stages of decay, allude to symbolic depictions of flowers in historical still life and memento mori paintings.

The Venetian blind of the exhibition’s title, believed to have originated in Persia and made popular by Venetian traders in the eighteenth century, figures prominently in the composition, further accentuating the screen’s nature as an object of privacy. Venetian history is the focus of a number of the artist’s works on paper, some of which draw inspiration from the island of San Michele, which since 1807 has been the city’s main cemetery. Long enthralled by the island, which reminds the artist of one of his favourite paintings, Arnold Böcklin’s Isle of the Dead, Bas alights on the practice, recently revived, of erecting a temporary bridge to it for All Souls’ Day – a literal bridge to the dead that echoes his career-long interest in transitional spaces and moments.

Bas’ enduring fascination with the paranormal is illustrated in a further work which refers to the discovery in 2009 of a ‘Vampire of Venice’, unearthed in a mass grave on the island of Lazzaretto Nuovo, supporting the belief that vampires were behind the plagues that swept the city in the fifteenth and sixteenth centuries. Known as ‘shroud eaters’, these ghouls were thought to spread pestilence from the grave by chewing on their funeral shrouds. A female skull was discovered with its jaw forced open by a brick – an exorcism technique used on suspected vampires at the time.

Coinciding with the Carnival of Venice, the exhibition echoes the history of the city brought vividly to life at this time of year, mirroring its references to past events, such as allusions to the plague in the bird-like Medico della Peste mask, which originated in the seventeenth century and was worn by plague doctors to protect them from airborne diseases and which, in a highly decorative form, is worn by carnival goers today.

Hernan Bas, born in Miami, Florida in 1978, lives and works in Detroit, Michigan and Miami, Florida. The artist’s recent solo institutional exhibitions include Hernan Bas: A Brief Intermission, CAC Málaga, Spain (2018) and Florida Living, staged at the SCAD Museum of Art, Savannah in 2017. In 2012 Bas opened The Other Side at the Kunstverein Hannover, the artist's first institutional solo show within Europe. A major survey of the artist's work previously opened at the Rubell Family Collection, Miami, in 2007 and toured to the Brooklyn Museum of Art in 2009. Other significant exhibitions include On the Horizon: Contemporary Cuban Art from the Jorge M Pérez Collection, Pérez Art Museum, Miami (2017); A Sum of its Parts, Polk Museum of Art, Florida (2016); Tracing Shadows, Plateau, Samsung Museum of Art, Seoul (2015); Aquatopia, The Imaginary of the Ocean Deep, at Nottingham Contemporary and subsequently travelling to Tate St. Ives (2013-2014); TIME, Bass Museum of Art, Miami (2013); Nightfall, MODEM Centre for Contemporary Art, Hungary, travelling to Galerie Rudolfinum, Prague (2012); Contemporary Magic: A Tarot Deck Art Project, Andy Warhol Museum, Pittsburgh (2011); Nothing in the World But Youth, Turner Contemporary, Margate (2011); Busan Biennale, Korea (2008); Like Color in Pictures, Aspen Art Museum (2007); Ideal Worlds - New Romanticism in Contemporary Art, Schirn Kunsthalle, Frankfurt (2005); Whitney Biennial (2004); and The Museum of Contemporary Art, North Miami (2002). Bas’ work was also included in The Collectors, conceived by Elmgreen & Dragset for the Nordic and Danish Pavilions, Venice Biennale (2009).