Japan Pavilion - Takahiro Iwasaki. Turned Upside Down, It's a Forest 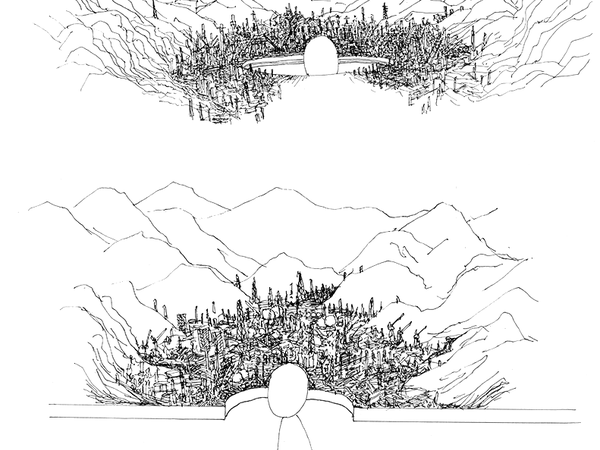 
Takahiro Iwasaki was born in the Hiroshima Prefecture where he is also currently based. This solo exhibition presents a selection of three-dimensional works created using everyday familiar objects including towels, books, and plastic rubbish. Characteristic of Iwasaki’s works is his fine handiwork by which he transforms his materials, such as creating steel towers from the threads pulled out of towels and construction cranes from bookmark strings attached to books. His use of these everyday objects draw influence from the numerous artifacts housed in the Hiroshima Peace Memorial Museum, conveying the instant changes in the forms of daily necessities as a consequence of the atomic bomb. Furthermore, his use of “figurative representation” can not only be described as a traditionally “Japanese” technique, but is a conscious decision that is based on the significant turnabout in Hiroshima’s position before and after the war, from a military city into a city of peace. Iwasaki’s method of making small interventions to have a remarkable impact on a large scale is that which also relates to Hiroshima’s experience of the atomic bomb, and how the power of microscopic atoms had resulted in the annihilation of the city.
For his works Iwasaki has selected motifs of both old and new buildings in the coastal regions of Japan, including a traditional shrine built above the sea, chemical plants that stand along Hiroshima’s coast, as well as oilrigs. Reflection Model (Ship of Theseus) is a new work based on the motif of a shrine reflecting on the surface of water, however since the reflected image is conveyed without fluctuation, it appears as an unrealistic representation that captures a fleeting and stationary moment in time and space. The fact that the shrine is depicted in its broken state after the typhoon is a conscious decision on Iwasaki’s part, who focuses on how its structure is made to protect its important areas by enabling sections of it to be intentionally destroyed when inflicted with external force, thus eluding any substantial damage. This method of elusion by accepting the circumstances presented is one that can be said to illustrate the Japanese way of confronting nature.
From issues of nuclear energy and the development of resources, to chemical plants that despite supporting the high growth of the postwar economy had been a serious cause for pollution, Iwasaki’s works shed light on the various challenges and situations confronted by Japan’s rural regions, and through them present an image of Japan from a different and distinguished perspective. The exhibition’s title, “Turned Upside Down, It’s a Forest” is in reference to a text written by Venetian novelist Tiziano Scarpa, describing how the city of Venice is built on an infinite number of stakes driven into the lagoon. The exhibition communicates the importance of changing one’s perspective, and invites the viewers to embrace different ways of looking.

Meruro Washida, curator at the 21st Century Museum of Contemporary Art, Kanazawa, was born in Kyoto in 1973. He Completed the Master’s program in art history at the University of Tokyo.
Washida plans contemporary art and architecture exhibitions based on themes such as local communities and participation. Major projects include solo exhibitions for Kazuyo Sejima + Ryue Nishizawa / SANAA (2005), Atelier Bow-Wow (2007), Jeppe Hein (2011), Shimabuku (2013), and Mitsunori Sakano (2016), and group exhibitions such as Kanazawa Art Platform 2008 (all of which were under the 21st Century Museum of Contemporary Art, Kanazawa).