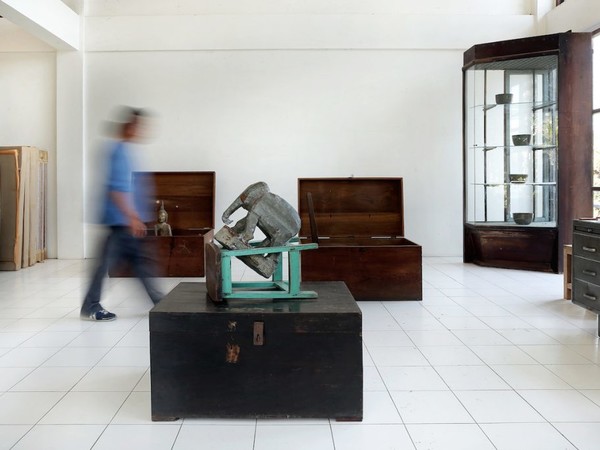 
The 57th International Art Exhibition is a platform that opens up opportunities for artists around the world to participate in the showcasing of contemporary art, as a worldwide exchange of knowledge, experience, and ideas.
Furthermore, the Office of Contemporary Art and Culture (OCAC) recognizes the importance of supporting Thai artists to get a chance to exhibit their work in an international stage. Such support will further affirm, in a global scale, the potential of Thai contemporary artists as well as Thai art professionals. It will provide an opportunity for the selected artist to present perspectives about Thailand in new dimensions, thus enabling contemporary art to be a medium of communication in promoting Thailand both directly and indirectly, and fostering the Thai culture.
Thai contemporary art has been active and continuously developing in terms of concept, presentation format, and movements. Somboon Hormtientong is one of the artists who has exceptionally developed the creative process and established a unique individualistic style, formed by his worldviews, ideas, experimentation, and an accumulation of his work experience.
Throughout the past years, Hormtientong’s work were mostly abstract. Highly educated and having been part of the German art circle for over 24 years, Hormtientong’s experienced, orderly, and disciplined practice resulted in a thoughtful and masterful works of art, with powerful lines and colors, and of unique compositions and narratives. With the reflected quality of both his art skills and aesthetic experience, his work opens up for the viewer’s contemplation and freedom in interpretation.
The artist enjoys experimenting with art techniques and finding new modes of artistic expression. For example, he experiments with matching realistic and abstract images, to see the effect when both narratives collide and juxtaposed with one another. For “On the Way” exhibition, 2014, Hormtientong traveled on his favorite motorcycle and took photographs of the scenes he was impressed by or felt connected to. He then created abstract images from these photographs in response to the realistic scenes. Likewise, in “Fervently Yours: 504 Years of Friendship” exhibition, 2015, the artist presented images made up of his signature abstract lines as a result of his journey and cultural experience in Portugal, where he was invited to by the Portuguese Embassy.
Moreover, the artist Hormtientong does not only adhere to two-dimensional plane abstraction. He also chooses three-dimensional found objects as a medium. These objects range from a table, a trunk, and a wooden dresser to common things such as metal wire, to name but a few. They are symbolically used in his art installation to represent the narratives. The work, in the end, yields Hormtientong’s individualistic style through a unique and finesse composition.
For the exhibition at the “57th International Art Exhibition,” Somboon Hormtientong seeks to focus on the city of Bangkok as the main theme. Not only that Bangkok is the capital city of Thailand with economic, societal, and cultural growth, but it is also a multicultural hub, full of history, and has diverse ways of life. Thus, Hormtientong would like to present through contemporary art the stories of Bangkok, a colorful and lively city with such sublime beauty that can be seen on ordinary streets, alleys, and Sois, where national arts and cultural integrity are preserved amidst the looming changes from technological developments, through Hormtientong’s viewpoint. This presentation in Venice will simulate Bangkok and offer a chance for the international audience to be imbued with Bangkok cultural happenings in a new perspective that is different from what they have seen on the internet or tourism brochures.
For the exhibition “กรุงเทพฯ Bangkok,” the artist intends to let the audience freely witness the image of Bangkok, to think of Bangkok, using their own imagination. This concept also relates to the main concept by Christine Macel, the curator of the “57th International Art Exhibition,” which is “Viva Arte Viva.” The “กรุงเทพฯ Bangkok” exhibition will be created by the artist, for the artist himself, in accordance to Hormtientong’s intention to express his feelings and thoughts towards Bangkok as well as to develop the work format he has planned.
“กรุงเทพฯ Bangkok” exhibition will help promote the positive image of Bangkok, the capital city of Thailand, to the international audience, who will be able to see Bangkok in a new perspective. It will showcase the potential of Thai contemporary art as well as the conceptual processes and development in the arts, building a strong foundation to encourage criticism, analysis, and interpretation of Bangkok with freedom.