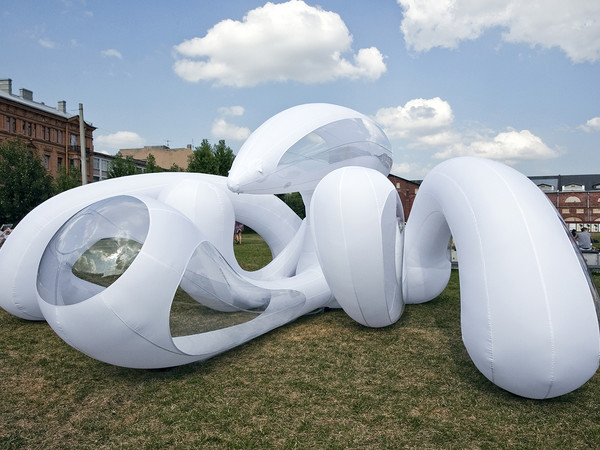 OPEN, the International Exhibition of Sculptures and Installations opens its seventeenth edition from August 28 to September 28, 2014 in parallel to Show Film Festival.
More than thirty international artists who will compete with site-specific interventions in the public areas of Venice Lido, and the island of San Servolo.
The exhibition, conceived and curated by Paolo De Grandis, co-curated by Carlotta Scarpa PDG is organized by Arte Communications, in collaboration with the Municipality of Lido Pellestrina and is sponsored by the Ministry of Heritage and Culture, Ministry of Foreign Affairs, Regional Veneto, Province of Venice.
In OPEN the combination of sculpture and environment is a fascinating and inexhaustible theme due to the strong conceptual matrix that is renewed with the aim of presenting the many aspects of artistic expression. The necessary counterpart is the urban spaces and green areas of a region viewed in the complexity of its anthropological and cultural.
OPEN has created over the years a strong genius loci, the presence of countless international artists, who have brought different cultures and traditions in the island redefining its cultural substratum. This creates every year a wide horizon of linguistic experimentation, whose options in the case of sculpture have become increasingly sensitive to the choice of materials, whether they belong to traditional sculpture or that are attributable to manufacturing to installations capable of the most amazing resemanticization processes.
For OPEN sculpture, installation and environment are measured in a plane parallel susceptible to personal vision of the artist in a poetic and conceptual path that can compete with certain aspects of the ritual and symbolic public spaces. The search for OPEN is therefore devoid of communication methods and language already given and somehow acquired but develops pride in taking the risk of the outcome.
OPEN then tries to define some areas, some environments that enrich this art workshop declined not only in canonical form, but also in the border areas where creativity is confronted with communication, with its mechanisms and its purpose.
Among the many possible interpretations is the continuous alternation of sensitivity in contemporary art in public spaces, there is the common thread of collaboration between artists, curators and promoting bodies in exciting artistic synergies. It renews the curatorial collaboration with Chang Tsong-Zung for China, Ebadur Rahman of Bangladesh and Yang Wen-i for participation in Taiwanese. In particular, the young artists will be presented from the National Taiwan University of Arts in parallel with an education project that will take place with a workshop aimed at children between the ages of 4 and 10 years. Opportunity for exchange between the Venetians and Taiwanese children to learn and experience the calligraphic techniques.
Tell of the great challenge of OPEN and its founder, Paolo De Grandis documentary edited and produced by Marco Agostinelli which will premiere during the closing event.
During the exhibition will be launched the fifth edition of the Special Prize Arte Laguna which will be awarded to a young artist selected by the jury of the Premio Arte Laguna. This award will offer the winner the chance to be among the finalists of the Arte Laguna Prize 2015, and exhibit the circuit organized by the association.
OPEN renews the osmosis between different cultural worlds, creates itself through spontaneous movements in the open and interactive.