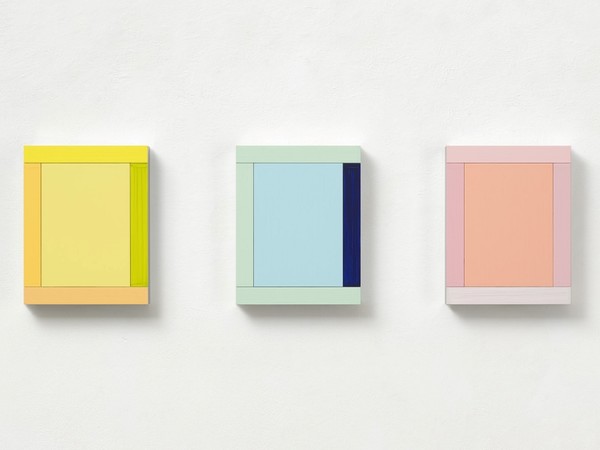 Dep Art Gallery is pleased to announce the exhibition “Painting Color Space” devoted to Imi Knoebel (Dessau, 1940), one of the best-known artists devoted to minimalism and constructivism, which opens the gallery's new exhibition season from October 7th 2021 to January 15th 2022.

Curated by Giorgio Verzotti, the exhibition presents 27 works created by the German painter from the late 1970s to the present - from the composition on paper Messerschnitt VI (1977) to the iconic Anima Mundi 106-3 (2019) on aluminum - outlining the different moments of his visual research.

Internationally renowned for a minimalist approach to color and geometry, Imi Knoebel conduct research strictly focused on the expressive qualities of form, material, surface, and space. Giorgio Verzotti, who previously curated with Marco Meneguzzo the exhibition Imi Knoebel. L'idea di Europa, held at the PAC Padiglione d'Arte Contemporanea in Milan in 1991, writes in the critical text: "From the beginning, Imi Knoebel has posed the problem of the relationship between the work and space, and we Italians immediately think of Lucio Fontana's lesson, which in Germany was propagated also thanks to the relationship between the Italian master and the ZERO group. In fact, among Knoebel's declared references are Fontana, together with Yves Klein and Piero Manzoni, and therefore the field of the most radical abstraction, chosen and frequented since his days at the Academy in Düsseldorf, together with his fellow artist Imi Giese, who died in 1974. They worked together, grateful to their professor Joseph Beuys for his encouragement, even though the German master said that his own research had little to do with theirs. They worked as self-taught, coming to art without really knowing what to do, says Knoebel today, but knowing well in which genealogy to place themselves".

The exhibition opens with the monumental work LUEB go 1276w (2013), an aluminum form whose borders are crisscrossed by yellow, blue and black strips. Representing the 1990s is a work from the DIN II series (1994), composed of four rectangular elements that follow each other in alternating primary colors, and the famous Kinderstern (1994), the children's star. Some examples of the editions entitled Face (2016) - in which bands of pure color are layered in an emotional and structural alternation - and the small An Meine Grüne Seite (2007) and Tafel (2016), which, like chromatic altarpieces, mark in a clear and linear way the perceptual poetics of the German master. Also characteristic of the artist are the works formed by compositions of many elements such as Tag und Nacht III E1-E5 (1998) and Nummer 9B-15B (2012), where we witness the true manifestation of color as an individual element, similar to a splinter that emerges from the strict structural connotations, just to name a few. Representing the last decade are three works from the Anima Mundi series, so dear to the artist: color and minimalism, essence of form and power of the sign, constitute the interpretative cornerstones of Imi Knoebel's artistic practice.

A bilingual (Italian and English) catalogue with a critical text by Giorgio Verzotti accompanies the exhibition.