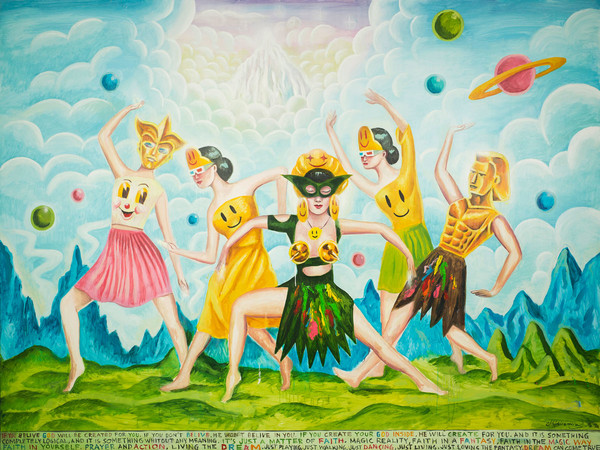 More brilliant and exuberant than ever, Sergio Mora lands in Italy with his spaceship, launched from Barcelona, finally touching down in Milan after many orbits in the heavens, with a cargo of cosmic dancers. The arrival is a bit behind schedule, but given the circumstances that is certainly nobody’s fault.
Born in 1975 in Barcelona, Sergio Mora calls himself a painter, illustrator and designer. He mixes languages, operating in multiple fields, as a basic tenet of his poetics, as demonstrated by the honors gained to date. In 2016 he won the Latin Grammy with El Poeta Halley by Love of Lesbian, for best packaging design, with the aim of uniting music, literature and art. He has created the interiors of the Bazaar Mar restaurant in Miami designed by Philippe Starck, working on azulejos, the ceramic tiles decorated in cobalt blue typical of the ornamental culture of Portugal and Spain, but with clear Arabian influences. The collaboration with the French designer continued in a second restaurant, the Cleo inside the Mondrian Park Avenue Hotel in New York. In 2017 he took part in the Truck Art Project, working on the sides of a trailer truck that traveled through Spain to reach the ARCO fair in Madrid. His works have been shown in various European and American galleries.
Getting back to music, besides the explicit references that can be seen in his works, Mora has created artwork, posters and ads that are tributes to Mark Lanegan and David Bowie, the Pixies and Marc Parrot.
But above all, there’s the painting. Rich, phantasmagorical, painstaking, dreamy.

To really find out who Sergio Mora is, let’s listen to what his friends have to say:
he likes bulls, paella and subculture
he likes Tikis, tattoos and punk rock
he likes Mr. Spock, the Clash and the Atomic Age
he likes the Fifties, the Cramps and Alice in Wonderland
he likes the Kamasutra, David Bowie and Mexican lucha libre
he likes rabbits, the circus and trucks
he likes the Ramones, the Day of the Dead and taverns.

Nothing need be added to such a perfect portrait.
To return to our exhibition, Cosmic Dancers. It is a voyage, a real trip into the Space Age, between nostalgia for the Fifties, when the future was an optimistic projection of the present, when man dreamt of rising from the earth and flying in space, with a soundtrack by Les Baxter, master of the exotic.
Galleria Antonio Colombo, accustomed by now to sudden transformations, is getting ready this time to become a stage for a timeless show, with artificial hues in a world where plastic was not public enemy number one, and you could sip a cocktail with garish colors without feeling guilty.
To get closer to the point, in the new show made in Moraland, an absolute premiere for Italy, beside the latest paintings of the Cosmic Dancers series, made for the occasion, we will find a “vast assortment” of the artist’s recent output, taken from the successful cycles Welcome to Paradise and The Power of Fiction. Large and medium-sized oils on canvas, as well as about a dozen works on paper where Sergio Mora practices the noble art of drawing, returning to the technique already utilized in the azulejos.