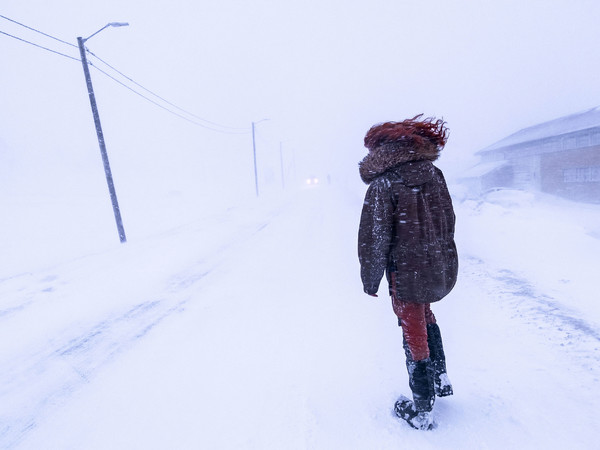 From the 27th of May to the 4th of September ARCTIC TALES takes place at the Museum of Rome in Trastevere, which offers two photographic exhibitions by Valentina Tamborra and a series of events dedicated to the discovery of the Arctic from an artistic, cultural and environmental point of view.

ARCTIC TALES is promoted by Roma Culture, Sovrintendenza Capitolina ai Beni Culturali and by the Royal Norwegian Embassy in Rome in collaboration with the Norwegian Seafood Council and Zètema Progetto Cultura museum services.

The two photographic reportages by Valentina Tamborra, titled "Skrei – Il Viaggio" and "Mi Tular - Io sono il confine", were born from the photographer's interest to investigate the borders and discovery of territories in Northern Norway. In her professional career, Tamborra investigates the concept of borders under different interpretations, analyzing them as physical, social and cultural frontiers. The reportages touch upon fundamental themes such as climate change, sustainability, inclusion, respect for cultures, preservation of tradition, and language.

"Skrei – Il Viaggio", curated by Roberto Mutti with the artistic direction of Giuseppe Creti, takes its name from the ancient Viking expression "å skrida" which means "to travel, migrate, move forward". It also happens to be the name of a particular type of Norwegian cod. After having been exhibited during the fifth edition of the Vogue Photo Festival in 2020, “Skrei - Il Viaggio” arrives in Rome to narrate the migrations of men and animals.
Valentina Tamborra's journey began in the Vatican Apostolic Library in Rome and in the Marciana National Library in Venice, where the testimonies of the adventurous story of the navigator Pietro Querini are kept. The man, who survived the sinking of his own ship, arrived at the Lofoten islands in 1432 and were rescued by local fishermen from whom he learned the methods of conservation of cod, which he exported to Venice upon his return. The trip deeply linked Italy and Norway, marking the culinary fate of stockfish in Italian tradition.
With this project, the photographer pays tribute to Rome and Venice, arriving at the Norwegian islands of Lofoten, the heart of her reportage where she celebrates the stories of people, places, and ancient and modern traditions.

With “Mi Tular - Io sono il confine”, curated by Giuseppe Creti, Valentina Tamborra moves to the Svalbard Islands, a strip of frozen islands nestled in the Arctic Ocean, where polar bears and people compete for an invisible border. The word "Tular", which in ancient Etruscan means I am the border, brings to mind the myth of Ultima Thule, the last island beyond the known world. Svalbard – where winter temperatures drops to -30 °, the light is a mirage that lasts a few hours a day and the number of polar bears equals the number of inhabitants – has always been known to be an inhospitable place for people. However, in recent years something has changed: the people who decide to stay are rising. To date, there are around 3,000 inhabitants and 3,000 polar bears. There are 40 nationalities present on the archipelago.

Tamborra takes a closer look at those who have decided to settle in this remote corner of the world, which they themselves call a "bubble".
In this human outpost on the edge of the North Pole, very distant stories apparently intersect: people from all corners of the world live here, side by side, in a peaceful mix of languages, cultures, ethnic groups and religions. Where nature is lethal, the people must find a new balance to survive.

The subjects portrayed are scientists; sled dog breeders; philosophers who work as plumbers; open gourmet restaurants with the largest selection of wines in Europe in a place where alcohol is rationed; a miner, one of the last, who in his spare time writes fairy tales for children: ambitious people who, in this remote place, try to preserve a universal memory by starting a huge project, the Arctic World Archive, the largest " archive" of all human knowledge inside an abandoned mine.
Svalbard is the seat of many research activities, including the northernmost university in the world, the Norwegian Polar Institute, managed until 2021 by a passionate and courageous man, who has decided to tell and defend the delicate beauty and majesty of the Arctic: Kim Holmén. Holmén has held many research roles on Svalbard over the past thirty years. Today, he is Associate Professor at ITU, the Arctic University of Norway, which is located in Tromsø.

Below is the program of events hosted in the museum's Multimedia Room, which will include a visit to the exhibition.

Kim Holmén - together with SIOI President Franco Frattini and artist Valentina Tamborra - will be one of the protagonists at the first event of ARCTIC TALES, entitled Sustainable societies, which will be held on Friday 27 May, from 14:00 to 16:00, in English.

The events of ARCTIC TALES continue on Tuesday 7 June from 17:00 to 19:00 with Global Ocean Panel, an panel in English with Henrik Harboe, Norway's Special Envoy Oceans, the director of FAO's Fisheries and Aquaculture division, and other experts in the field. The event is held in the occasion of the International Year of Artisanal Fishing and Aquaculture.

On 22 June the Museum of Rome in Trastevere will also host an important event from 17:00 to 19:00: An Introduction to Sámi Contemporary Art: from the Venice Biennale till the history behind with Kristoffer Dolmen, Director of the Sámi Dáiddaguovddáš, Sámi Contemporary Art Center, which will offer an overview and present to the public the scene and history of Sámi contemporary art, on the occasion of the Sámi Pavilion for the 59th Biennale di Venezia. At the opening of the evening Valentina Tamborra will show her new photographic project “Áhkát - TerraMadre”, dedicated to the Sámi people. The photographer's journey and trilogy will culminate with this third Arctic chapter.

VALENTINA TAMBORRA was born in 1983 in Milan, where she lives and works.
She mainly deals with reportages and portraits, passionate about mixing storytelling and image. She has collaborated and collaborates with some of the main NGOs and with other organizations such as AMREF, Doctors Without Borders, Tree Of Life, Emergenza Sorrisi and the Italian Red Cross. Her projects have been the subject of exhibitions in Milan, Rome and Naples.
She has been published in the main national media (Corriere della Sera, La Stampa, la Repubblica, Il Messaggero, Il Manifesto) and has also appeared in radio and television broadcasts (RAI, Radio 24, Radio Capital and Rai Radio2). She teaches at the Italian Institute of Photography in Milan and has held lectures and workshops at the IED (European Institute of Design) and Naba (New Academy of Fine Arts), where Doppia Luce, her first major personal project, after having been on display gave rise to a cycle of lectures. She won the “Premio AIF Nuova Fotografia” at Milan’s Photofestival in April 2018.