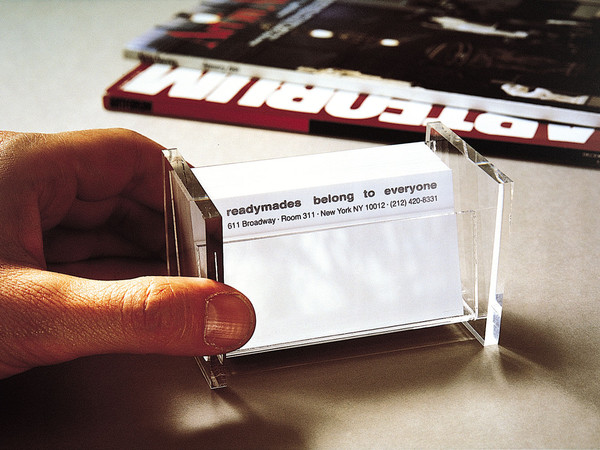 Philippe Thomas declines his identity is the first exhibition that an Italian institution has dedicated to piecing together an expanded portrait of the figure of Philippe Thomas (1951-1995). The show takes its title from that of a book connected with a lecture-performance by the French artist best known for his research connected to the concept of authorship. The latter led him to eventually annihilate his own presence. He operated within a conceptual approach driven by the practice of making the buyer of an artwork at once its owner and its author.

In 1985 he created in the form of the founding of a service agency named readymades belong to everyone® (1987-1993). Established in 1987 at the Cable Gallery in New York in its English version (readymades belong to everyone®) and then in Paris at Galerie Claire Burrus in the corresponding French translation (les ready-made appartiennent à tout le monde®), during the course of its existence, the agency carried out countless international projects, with over sixty collectors and institutions as its signatories. Since the agency’s closure in 1995, its legacy has been conserved in the collection of MAMCO (Geneva), and is displayed at MACRO in its entirety. The agency formulated its own graphic identity and communication, including a logo and advertising campaigns. With the purpose of perpetuation of a position like that of readymades belong to everyone®, the exhibition project, on three different historical levels, incorporates the contributions of figures who lived in the same period, or were influenced by the agency, as in the case of self-styled readymade artist Claire Fontaine. Reflecting the same need to respond to the structures taking an increasing hold on the art system, other examples appeared, such as The Offices of Fend, Fitzgibbon, Holzer, Nadin, Prince & Winters (1979). Christopher D’Arcangelo, on the other hand, foreshadows the spirit of the agency and Philippe Thomas, with an approach to the dematerialization of art through a forceful political stance: his body put into chains, or the complete absence of any trace of his being. Philippe Thomas declines his identity takes its title from that of a book connected with a lecture-performance by Thomas.