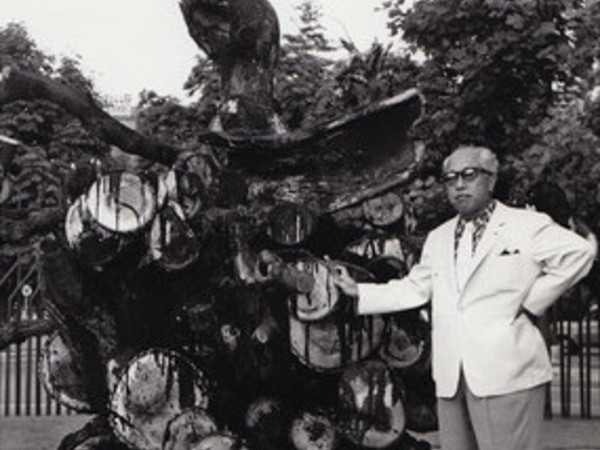 Ticket price: Adults € 10.00 – Reduced rate € 8.00 Free admission on the first Tuesday of each month unless a public holiday


The GAM of Turin inaugurates its new exhibition programme with the second appointment in the Archives series, launched in 2016 with the event dedicated to Giovanni Anselmo. The Archives project aims to spotlight rare works of art, archive materials, and original documents. In the age of digital dematerialization, GAM draws upon its repertoire of images and documents that can contribute, with previously unpublished works, to analyzing and contextualizing the practice of artists and to reflecting on modes of knowledge and diffusion.
Archives 2, titled 1960–1962 Japan in Turin, aims to focus on two of the many initiatives that, between 1958 and 1962, made Turin one of the key locations in Europe concerning the practice of Japanese contemporary artists: the Ikebana installed in 1960 by Sofu Teshigahara in the garden of the recently opened Modern Art Gallery and the exhibition Strutture e stile (Structures and Style) conceived by Michel Tapié and held at the museum in 1962.
In 1957, the French art critic Michel Tapié—who had been living in Turin since 1956—encountered, on a trip to Japan, the avant-garde artists of the Gutai group of Osaka. In April 1958, he organized, as part of the International Festival of Osaka, the exhibition The International Art of a New Era. Informel and Gutai. On that occasion he met Sofu Teshigahara, founder of the Ikebana Sogetsu School in Tokyo, a great innovator of the ancient Ikebana tradition.
A few months after the inauguration of the new Civic Gallery of Modern Art, Sofu Teshigahara was invited to install a monumental Ikebana made from logs and tree bark, called Felicitazioni, in the garden of the museum. It was presented to the public on July 14, 1960.
In collaboration with the gallerist Luciano Pistoi, Tapié began introducing Japanese contemporary art in Italy and Europe, starting from Turin. In the spring of 1959, the gallery Notizie dedicated an exhibition to the Gutai group while the Circolo degli Artisti hosted the Arte Nuova exhibition, a first encounter between European, American, and Japanese artists. These relations were consolidated in 1962 at the Promotrice di Belle Arti with L’Incontro di Torino. Pittori d’America, Europa e Giappone (The Meeting of Turin. Painters of America, Europe, and Japan) and the Civic Gallery of Modern Art with Strutture e stile. Pitture e sculture di 42 artisti d’Europa, America e Giappone (Structure and Style. Paintings and Sculptures by 42 Artists from Europe, America, and Japan), held in partnership with the International Center for Aesthetic Research (ICAR), founded two years earlier by Tapié with the architect Luigi Moretti and directed by Ada Minola.
Archives 2 is centered around three sculptural works and a wealth of documents. Franco Garelli (1909–1973), who had been in Japan in late 1959, is represented by Figura [D’estate] (Figure. [In Summer]), 1962, donated by the artist to the Gallery of Modern Art for the Strutture e stile exhibition. Sofu Teshigahara (1900–1979) presents two never-before-seen 1958 sculptures in wood, copper leaf, and mosaic. A selection of documents from the Historical Archives and the Photo Archive of the Torino Musei Foundation reveals the genesis of the 1962 exhibition through letters and photographs of the event and inauguration, accompanied by the original edition of the catalog and the volume by Michel Tapié and Tore Haga Continuitè et avant-garde au Japon, published in 1961 by Edizioni d'Arte Fratelli Pozzo of Turin directed by Ezio Gribaudo. Moreover, the inauguration invite and the exhibition poster, with their innovative design by Giò Minola, are also displayed.
To commemorate the Ikebana by Sofu Teshigahara from 1960, the Northern Italy Study Group of the Ikebana Sogetsu School in Tokyo installed in the museum garden a new monumental Ikebana titled Sasageru - Omaggio (贈 り 物) made with tree bark, branches, bamboo, and aluminum foil. Photographs from the inauguration of Felicitazioni, found during archival research, along with a specially drafted timeline titled Japan / Turin. 1958 – 1964, are displayed here.
In 1927, when the Sogetsu (literally "Grass and Moon") School was established, Teshigahara renewed its traditional practice while using new techniques and materials and affirming that Ikebana can be done by anyone, anytime, anywhere, and with any material, as documented in the film Ikebana, shot in 1956 by his son, director Hiroshi Teshigahara (exhibition screening). In 1958 in the new headquarters of the Sogetsu School, built in 1955 by architect Kenzo Tange, Hiroshi Teshigahara established the Sogetsu Art Center, the epicenter of avant-garde art in Japan and of exchange with the protagonists of international research. This aspect makes relations with Turin especially meaningful.