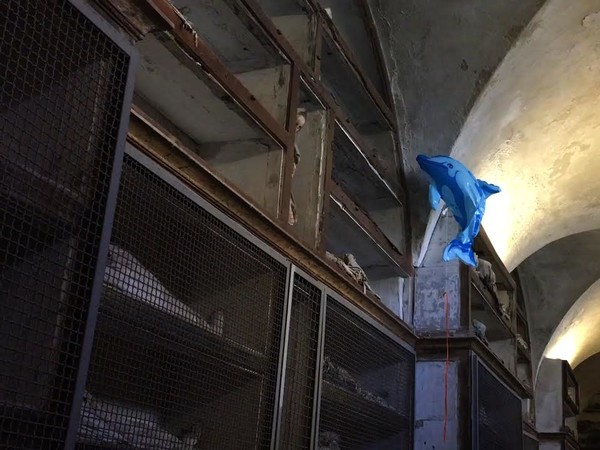 Ticket price: A single ticket valid for the Doge’s Palace and the combined itinerary of Museo Correr, Museo Archeologico Nazionale and Monumental Rooms of the Biblioteca Nazionale Marciana: Full 20 € / Reduced 13 € / Free: children aged from 0 to 5; disabled people with helper; enabled tourist guides and interpreters accompanying groups or individual visitors; for groups of at least 15 people, 1 free entrance (only with prior booking); accompanying teachers of school groups (up to 2 teachers per group)


Douglas Gordon (Glasgow 1966) presents in Venice the world premiere of his video installation Gente di Palermo! (Citizens of Palermo), which includes a reassembled home movie he shot in the Cupuchin Catacombs in Palermo, an underground cemetery which houses thousands of exposed embalmed corpses. The mummies, either standing or lying down, are divided into gender, age and social categories. While visiting the children’s wing, Gordon came across an abandoned inﬂatable dolphin ﬂuttering freely among the corpses. Gordon has often focused in his art on the juxtaposition of doubles and opposites: here the macabre contrast between life and death, between the playful aspect of the inﬂatable dolphin and the dramatic nature of the context, is encapsulated in a few frames whose heavy pathos derives from their warning of the brevity of life, but also from the macabre and ironic presence of a toy that belongs more in an amusement park than a cemetery.