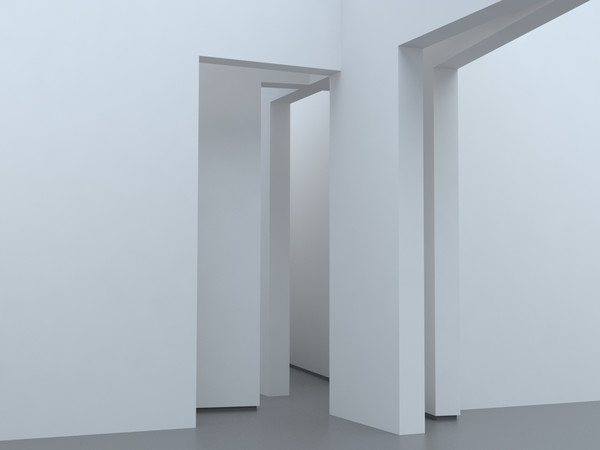 Correction is the project presented by artist Ignasi Aballí (Barcelona, 1958) for the Pavilion of Spain at the 59th International Art Exhibition – La Biennale di Venezia, curated by Bea Espejo.
Aballí’s proposal consists of two actions: a 1:1 scale architectural intervention of the pavilion and the publication of six guides. Both actions were conceived with the idea of correcting the apparent errors the artist found during his research on the physiognomy of the pavilion and the city of Venice. First, Aballí corrects the layout of the Spanish building by rotating the whole structure by ten degrees, thus aligning it with the neighboring pavilions in the Giardini. With the second action, he corrects the generally accepted idea of a tourist guide to this Italian city.
Correction arises from an apparent error that Ignasi Aballí noticed when he looked at the blueprints for the Spanish Pavilion with respect to its location in the Giardini of La Biennale di Venezia. They reveal that the building appears slightly displaced compared to the neighboring pavilions of the Netherlands and Belgium. Moreover, there is a disturbing proximity with the latter, where the walls of both pavilions seem to touch. Based on this, Aballí embraces the hypothesis that the current location of the Spanish Pavilion is an error and poses the question, what would happen if we moved the pavilion to align it with the rest of the adjacent buildings, and what changes would that modification imply?
As a consequence, Correction “rebuilds” the interior of the Spanish Pavilion by rotating it ten degrees to align it with the neighboring buildings. An intervention of the building’s architecture that upends the memory in spatial terms and modifies the exhibition space, its location in the Giardini and its relationship with the city itself. The visitor will find a reconsidered space in which the original walls, which have not been touched or manipulated, but converted into disused material, will be mixed with the new walls resulting from the ten-degree “turn” made by the artist.
Parallel to the rotating of the pavilion, the project is completed with the publication of six books about Venice that aim to correct what we would normally understand to be a tourist guide to the city. The artist identifies another apparent error in relation to the city: Venice is claimed to be one of the most visited cities in the world and, at the same time, faces serious problems due to mass tourism, which puts it on the brink of collapse. This contradiction, added to the global pandemic, which has led the city to be “erroneously” empty, as if that were an anomaly, leads the artist to look at it from another perspective: a Venice that slows down the everyday tourist’s quick visit to pause at everything central to the artistic practice of Ignasi Aballí.
The six free guides have been distributed at different points in La Biennale di Venezia and throughout the city. There is also a map with information on the location of each of the guides, which can be picked up at the Spanish Pavilion.
The themes of the guides revolve around:
Almost. A conceptual tour through the pavilion, the Biennale or the city. It is about the impossibility of retaining a definitive meaning and not taking anything for granted.
Inventory. A walk through the streets observing the different shades of the walls. Venice, through the color of its houses.
Stories. Slides of Venice compiled by Aballí showing works of art, other cities and other trips, that appear discolored by the sun in his studio. They have been gathered in this volume to discuss the visual saturation that both the city and La Biennale di Venezia itself can cause.
Panorama. Venice seen in its details and in a myriad of worthless materials susceptible of being works of art. It is a story about absence.
Horizons. Landscapes of skies and seas that merge into the Venetian horizon extracted from newspaper clippings. The sky as a great, unmeasurable void, and the sea as an unreachable crossing.
Landscape. Texts that classify concepts and atmospheric phenomena. The probable, but not impossible, in a single image showing the invisible side of the landscape.
The architectural work inside the Spanish Pavilion was done in collaboration with MAIO Architects, a studio located in Barcelona made up of María Charneco, Alfredo Lérida, Guillermo López, and Anna Puigjaner. The artist collaborated with Caniche Editorial for the publication of the new guides to the city.
Correction is completed with the publication of a catalog that includes a conversation between Manuel Borja-Villel, Director of the Museo Nacional Centro de Arte Reina Sofía, and Ignasi Aballí and texts by curator Ruth Estévez, Uruguayan artist Alejandro Cesarco, Belgian curator and editor Moritz Küng, and Bea Espejo, curator of the project.