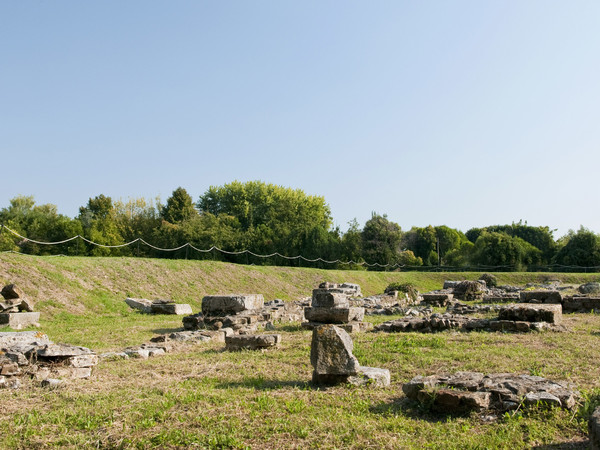 Currently three paved squares are visible, originally surrounded by structures, in wood or masonry, for the sale of food and goods of various kinds.

One of them was unearthed following the recent excavations in 2020. The easternmost square is organized around an open area, equipped with a well and water collection channels. The square blocks with through holes that delimit it were probably intended to support wooden stalls.

The central square, also built around a central courtyard, reveals the presence of arcades on each side, behind which the shops housed. In one of these, about thirty amphorae were found buried: at the time of discovery, they still contained partially burnt grains of wheat.

The last square unearthed, the westernmost, is paved with Aurisina limestone and was also surrounded by arcades. Here was found a gold coin minted by Emperor Leo I (457-474), the only one known in Aquileia to this day, which testifies how the commercial life of the area had not been affected by the destruction resulting from the invasion by Attila's Huns in 452.

The square is intentionally split and interrupted in the center by a crescent cut, probable housing of the wooden palisade of an early medieval village that came to occupy this area before a new phase of a funerary nature: in the recent excavations some tombs of the 10th century.
Tweet