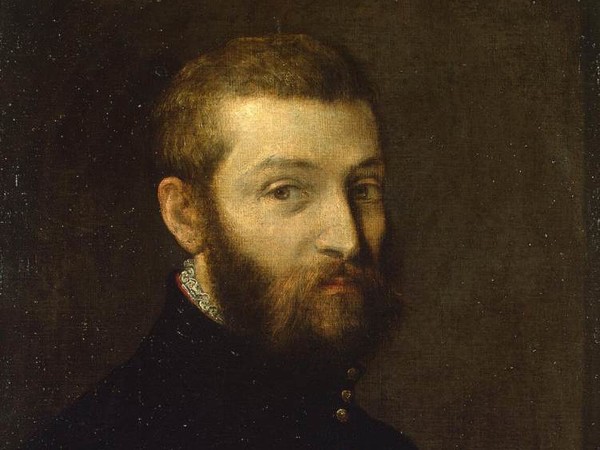 Il Veronese was born and brought up in Verona, but he worked in Venice. At a young age, in 1553, he was called to work in the Doge’s Palace and his art was outright widely acclaimed. His style was already well-defined: a broadly decorative painting, with a marked sense of spatial values and clear manneristic influences from Parmigianino and Giulio Romano, but heavily free and independent, especially in the intense and lavish use of colour. In 1555 he started decorating the church of San Sebastiano, which he continued for fifteen years and which was his greatest and most significant endeavour. The frescoes of the vestry, the Stories of Esther on the ceiling and the Execution of the Saint on the choir walls feature splendid and precious colours, with silvery hues and shimmering effects. The next year, with the agreement of Titian and Sansovino, he received an award for his paintings of the Biblioteca Marciana, commissioned by the Procurators of Saint Mark. Next, he worked with Palladio on the frescoes of Villa Barbaro, Maser, which proved the sensitivity of his classicism, with a light and bright decoration, made up of windows and openings onto deceptive spaces. His favourite theme still remained Suppers, monumental paintings he started working on from the 1560s: the most famous ones include Supper at Simone’s (Galleria Sabauda, Turin, Brera Art Gallery, Milan and Gemäldegalerie Alte Meister, Dresden), the Wedding at Cana (Louvre, Paris) and the Feast in the house of Levi (Gallerie dell'Accademia, Venice). The scenic splendour and the almost daring celebration of colours earned him a trial by the Roman Inquisition. In his last years he was one of the protagonists of the renovation of the Doge’s Palace, after the fire of 1576. Here, among numerous frescoes, he painted the Triumph of Venice in theCouncil Chamber and he made what will be remembered as his masterpiece: the chamber of the council of ten (1575-77).