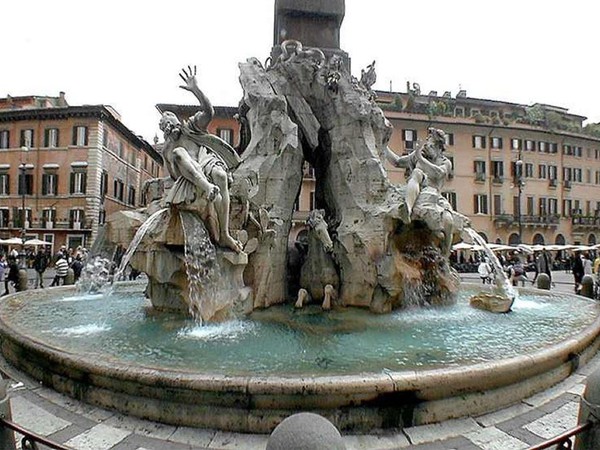 The urban setting of this fountain, which is the work of Gian Lorenzo Bernini, consists of a space – that of Piazza Navona – which has evolved through numerous different interventions. These have been superimposed and integrated through the ages and this has left historical traces which are still visible in the architecture which surrounds the piazza. The ancient stadium of Domitian (which was built between 81 and 86 A.D.) is still clearly visible in the formal and dimensional setting of the modern square.The fountain, which was commissioned by Pope Innocent X Pamphili (1644-1655), plays a central role in the urban building plan of the Pope, who saw Piazza Navona as the most representative place in the city for the glorification of his Pontificate. Infact the piazza was subject to an impressive restructuring campaign that included the construction of Palazzo Pamphili as well as the Church of Saint Agnes in Agony. From the earliest years of his Pontificate, Innocent X, had planned to built the most majestic monumental fountain in all Rome in the centre of this piazza (in the place of the horse trough which stood there at the time) and the first work that was commissioned is recorded in a papal commission dated the 11th of April 1647 in which the Pope decrees that the water from the Vergine aqueduct should be brought to Piazza Navona before it reached the Trevi Fountain and that Francesco Borromini should be the architect charged with the execution of the work. However Gian Lorenzo Bernini replaced Borromini in 1648 after he presented the Pope with a silver model of his project for the fountain which was immediately approved. The artist then carried out a number of different designs and models, some of which are still conserved, and when he actually began the construction of the monument he used, for the execution of the project, his trusted team of assistants, which was comprised of sculptors and stonemasons working under his direct control.The elements in travertine, which were completely carved in situ, were entirely done by a group of masons headed by Giovanni Maria Fracchi: though some sources suggest that Bernini himself personally finished some parts of the rocks where there are animals and vegetation. The impromptu way in which Bernini worked is well known: indeed often the result is the fruit of this combination of ideas and planning that are embodied in his work through his complete mastery of building and carving techniques. The statues of the Rivers are carved in marble: the Nile (by Giacomo Antonio Fancelli), the Ganges (by Claude Poussin), the Danube (by Antonio Raggi), the River Plate (by Francesco Baratta) and the Papal Coats of Arms were all carved in studio, and subsequently assembled and positioned on the rocky background that makes up the base for an Egyptian Obelisk carved out of granite that was crowned with a bronzed dove, the symbol not only of peace, but also of the Pamphili family.The five pieces of the obelisk had been found lying in the Circus of Maxentius and were transferred to Piazza Navona, recomposed and erected on the rocks in 1649. The iconography of the fountain, which is complex and has been interpreted in many different ways, predominately regards the global domination of the Papacy, which is represented by the four great rivers that cross the continents that were known at the time (Europe, America, Africa and Asia). On the 12th of June 1651 the fountain was inaugurated to the great excitement and wonder of the patron and other observers, as is reported by the chronicles of the day and the accounts of travellers.
Tweet