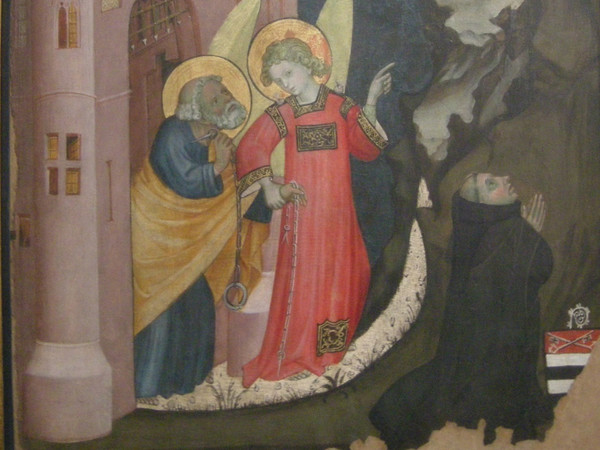 These two panels are all that remain of a polyptych of Saint Peter that is now unanimously attributed to the Torinese painter Giacomo Jaquerio. It is likely that he painted it for the Benedictine abbey of Novalesa. The first scene shows the Calling of Saint Peter. While he is fishing, the man who would become the prince of the apostles is beckoned by Christ. Behind the saint, three other men are kneeling down and pulling their nets into the boat. Among them is Peter’s brother Andrew, who followed Jesus on the same occasion. He is easily identifiable because of the halo around his head. The other panel shows the Liberation of Saint Peter, who is literally taken by the hand by an angel and led away from prison. The presence of a Benedictine monk confirms that the painting came from the Benedictine abbey, as does the coat of arms of Vincenzo Aschieri, who was the abbot in Novalesa from 1399 to 1452.
Tweet