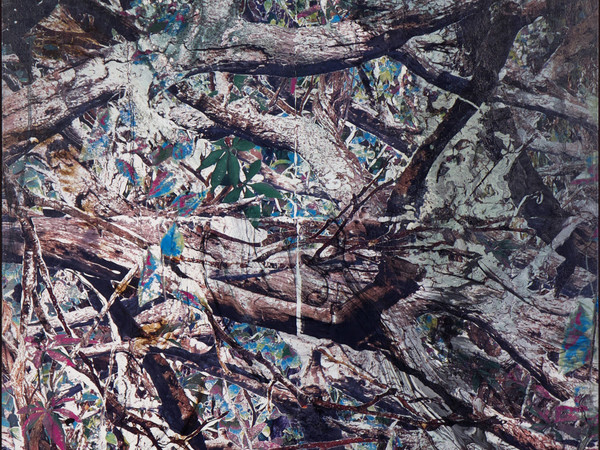 Eduardo Secci Gallery is pleased to present En Plein Écran, the solo online exhibition by the Australian artist Michael Staniak. The show, lasting from March 9 to May 9 2021, will include Staniak’s last series of works exploring the intersection between physical and virtual experience.

In a contemporaneity where our connection with alterity is constantly filtered by a screen, Staniak’s body of work questions our relationship with the natural world through the significance that the act of painting assumed across the years. Impressionists saw technology as an impulse to establish a direct and first hand relationship with the surrounding landscape, focusing on the creative process while trying to capture the instantaneity of a new rapidly changing historical period. Similarly, Staniak’s research, aware of the weight that new technologies have on our perception of images and nature, dwells on the exploration of organic elements and examines how we can reconcile with the natural realm.

Indeed, the same “particular slant towards modernity” to which Belinda Thomson refers when describing the Impressionist project, seems to be also at the base of Michael Staniak’s research. Within the exhibition the artist presents two major new series “Nature “ and “Oxide” paintings, that while remaining connected with the screen as a point of departure, propose a reflection on the role of painting in modern times. In his work, the tradition of painting en plein air becomes en plein écran. If the Oxide series is characterized by the use of materials found in the surrounding landscape, the Nature series is the result of a combined digital and chemical process, where individual items, such as PNG or pictures of natural elements, are collaged in software, printed to specific plastic and fused to paint, creating a familiar yet uncanny fictional landscape.

In the Oxide paintings, Michael Staniak creates the paintings mostly by hand - he builds up texture with uneven layers of plaster and then paints the surface in a range of ways - his paintings bear a particular resemblance to flat digital prints. Indeed, one must view the works up close to perceive any texture or depth, and as such, they behave like contemporary trompe l’oeil paintings that baffle the senses. Some paintings do however utilize digital methods of output and in so doing create a dialogue between the two modes of production. His works explore a new aesthetic in painting, one which is influenced by digital technologies, including touch pads, smart phones, personal computing and the Internet. In addition to Staniak’s identification with an art-historical heritage that includes cave paintings, ancient marble reliefs, minimalism and drip paintings, he also adds to the legacy of Southern California’s Finish Fetish artists of the 1960s and 1970s and the Light and Space artists of the same era.